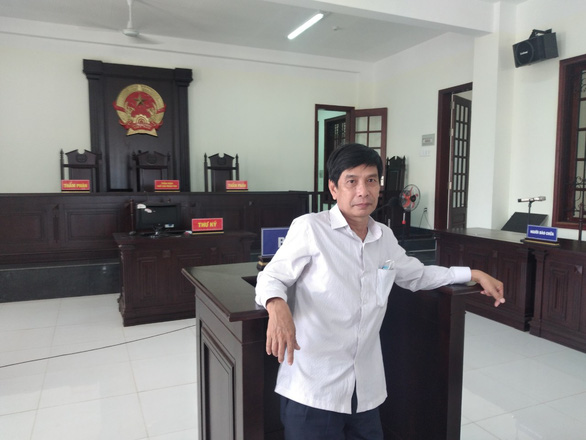 A 55-year-old man, who had his prison sentence upheld on charges of traffic violations, jumped to his death from the second floor of the courthouse where he was tried, but the court in southern Vietnam insisted they had remained impartial in giving the final verdict.

Local authorities held a press briefing on Saturday after Luong Huu Phuoc, who lived in Dong Xoai City, the capital of Binh Phuoc Province, had committed suicide on Friday in protest at a court ruling.

On Friday, Phuoc, the defendant, had his three-year sentence for breaking regulations on road traffic safety upheld by an appeals court, said Nguyen Tien Cuong, head of the provincial Party Committee’s Propaganda and Education Committee.

According to the case file, Phuoc went home at around 11:00 am on January 15, 2017 after having alcoholic drinks at a friend’s house in Dong Xoai, which was still a district-level town at the time.

Around 1:00 pm on the same day, one of his fellow drinkers, Tran Huu Quy, called Phuoc by phone and asked him to come back to the house because he had mistakenly taken a pair of sandals that belonged to another drinker.

Upon his arrival, he was persuaded to go to a karaoke bar with Quy. Phuoc agreed, but realized that Quy was not wearing a helmet as they were driving.

They drove to Quy’s house to get a helmet.

Phuoc turned left to cross the road. As their motorcycle approached the opposite lane, another motorbike, whose driver was later identified as Lam Tuoi, hit Phuoc’s vehicle.

Tuoi was carrying his brother, Tri Tiep, who was the owner of the motorbike.

Consequently, both Phuoc and Quy were injured. Two days later, Quy succumbed to his injuries.

A representative of the provincial People’s Court said the judges at the appeals court had taken a cautious approach and asked the local committee of judges for feedback so that they could make the most informed decision about the case.

On May 26, the court started hearing the case, with Phuoc, his lawyer, and other participants in the proceedings in attendance.

The court also summoned local investigators and traffic police officers who had examined the scene of the traffic accident.

Taking the documented evidence of the case into account, the provincial People’s Procuracy stated there were sufficient grounds to conclude Phuoc had committed the traffic violation and urged the judges to uphold the original judgment.

On May 29, the court upheld the three-year sentence against the 55-year-old man.

After hearing the verdict, he went home in the morning, but returned to the headquarters of the court in the afternoon and jumped to his death from the courthouse’s second floor.

Authorities found a bottle suspected of containing a pesticide on the floor.

Hours before his death, Phuoc had written on his Facebook profile that if his death could set alarm bells ringing for justice in Binh Phuoc Province, it would be worth doing so.

The local court said the panel of judges had conducted fair, impartial, and objective proceedings, and had based their judgments on documented evidence.

“This is a complicated case, so we have been very cautious. We are the people who administer laws, so the first requirement is to follow the rule of law, and protect human rights and citizens’ rights,” said Justice Le Hong Hanh, who presided over the appeals court.

The court summoned investigators and traffic police officers who had inspected the scene of the traffic accident and had measured the alcohol content of the injured parties to the court, she stressed.

“The confession of the defendant is only regarded as evidence if it is consistent with other pieces of evidence. We have not considered his confession as the only piece. We have been very thoughtful since [the case] relates to the fate of a person,” she said.

Lam Tuoi was found to have had an alcohol content of 0.57 milligrams per liter of breath, which at the time exceeded the permissible level of 0.25 milligrams.

“Why not take legal proceedings against [Tuoi]?” asked a reporter.

Judge Hanh said the offense against regulations on road traffic is based on four factors that constitute the crime. The most important is the erroneous factor in which the direct fault causes the victim’s death.

“The defendant’s fault was crossing the road without observation, which flouted Clause 2, Article 15 of the Road Traffic Law. [One who] crosses the road must observe and take priority over the people who are traveling in their direction,” she said.

At the court, Phuoc said he had made observations before crossing the road. However, according to the judge, Lam Tuoi and other witnesses said it was a straight road, and the view was not obscured so if Phuoc had observed the road carefully he would have seen the incoming bike.

Lam Tuoi did not have a driver’s license and drove the motorbike under the influence of alcohol, but he did not cross over to the other side of the road and investigators also failed to calculate the speed of his vehicle.

As a result, he was only fined for driving without a license and driving while drunk.

The Supreme People's Court of Vietnam has asked for an explanation from the People’s Court of Binh Phuoc Province, and intended to consider the filed case.