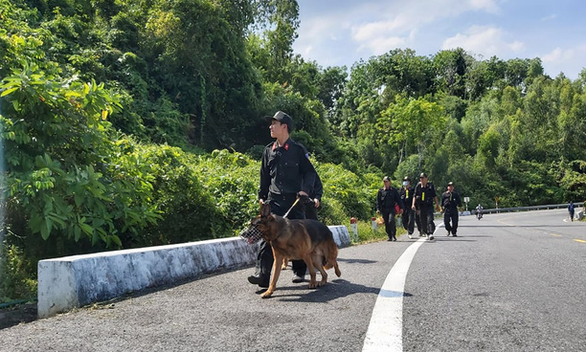 A convicted murderer who broke out of a prison in the central province of Quang Ngai for the second time on Wednesday may have left the Hai Van Pass that links the north-central province of Thua Thien-Hue with the central city of Da Nang, said an official on Saturday after forces had pulled an all-nighter searching the area for the man.

Trieu Quan Su, 29, who was found guilty of murder, robbery, desertion, and jailbreak, escaped from the T10 detention facility in Binh Son District, Quang Ngai Province at around 3:00 pm on Wednesday this week.

Colonel Tran Muu, deputy director of the Da Nang police department, told Tuoi Tre (Youth) newspaper on Saturday that the possibility of him having fled the Hai Van Pass has prompted his agency to withdraw part of police officers from the area.

However, local forces at the 5th Military Region of the People’s Army of Vietnam are still patrolling the pass.

Being of ethnic descent and trained in the military means the escaped prisoner is good at traversing rough terrains such as forests, the official said.

Su was thought to have scaled a local mountain easily on his first night of escape, thanks to it being a brightly moonlit evening.

The municipal police department asked police officers in Lien Chieu District to set up checkpoints along roads on the Hai Van Pass.

Police and military forces in Da Nang, together with police dogs, were called in on Friday to hunt for the dangerous criminal on the pass.

On Thursday afternoon, traffic police officers in Da Nang grew suspicious about a male scooter driver who was on the way to the Hai Van Pass.

When they signaled him to pull over, the man sped up, prompting traffic cops to chase after him. He then left abandoned the vehicle and fled towards the mountain.

The man was later identified as Trieu Quan Su. His suspected whereabouts was over in a two-kilometer from the foot of the Hai Van Pass.

Colonel Tran Muu arrived at the scene on Friday afternoon.

The senior police official predicted the criminal would be more likely to search for food and drink, so he asked forces to keep an eye out on local farms and along streams.

The Da Nang police department teamed up with their colleagues in the neighboring province of Thu Thien – Hue and the regional military to block off places where the criminal may be in hiding.

Asked whether Su could have jumped onto trains running on the Hai Van Pass to escape detection, Nguyen Thanh Khanh, director of Vietnam Railways’ branch in Hue, the capital city of Thua Thien – Hue Province, told Tuoi Tre that the average speed of trains traversing the hai Van Pass is around 30 kilometers per hour.

Khanh said there is very little likelihood of an ordinary individual capable of jumping onto running trains.

However, since the convict is a former commando and was in a tight corner, the director does not rule out the possibility.

“It is possible that Su jumped on a train despite the danger,” he said.

Local train drivers and operators of railway stations have been notified of the escaped prisoner. In case of any unusual incident, they would report it right away to the police.

A source told Tuoi Tre that around 7:00 pm on Wednesday, a 36-year-old female staff who was on duty at a railway guard in Binh Son District of Quang Ngai Province was robbed of her mobile phone by a young man.

At around 11:00 pm on the same day, a local resident reported someone had stolen their motorbike. The two incidents may have been caused by the escaped prisoner.

Su and another cellmate escaped from the T10 detention facility in Quang Ngai Province for the first time on November 8, 2015.

They were arrested in mid-December in the same year while hiding in the Vietnamese capital city of Hanoi. A police officer was injured after being stabbed by Su while in pursuit.

As reported by Tuoi Tre, Su served as a soldier at the 5th Military Region based in the northern province of Thai Nguyen.

During his time in the army, the man stole multiple belongings from his fellows and sold them for personal gain.

Having been caught red-handed stealing nine cell phones on one occasion, Su deserted the military, but his family members successfully talked him into returning to his unit.

However, the man deserted his unit for four additional times.

On August 22, 2012, Su murdered the 49-year-old owner of a café in Long Bien District, Hanoi before stealing her jewelry, two mobile phones, and some cash.

He was captured three days later and convicted of murder, robbery, and desertion by a military court in March 2013.