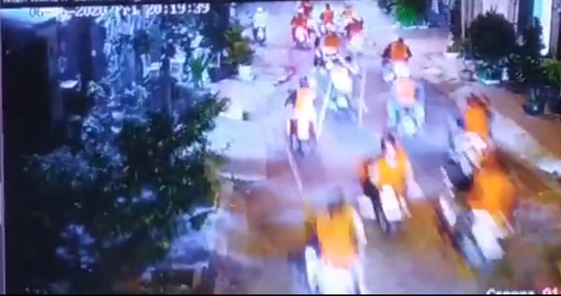 Police in Ho Chi Minh City have arrested multiple suspects who were among a group of about 200 men who attacked a local eatery on Friday night.

The suspects are being investigated for disrupting public order, assault, and property destruction, officers in Binh Tan District confirmed on Saturday.

Preliminary reports showed that the attack occurred at around 8:00 pm on Friday when approximately 200 men drove motorbikes to a diner on Street No. 6 in An Lac A Ward, Binh Tan.

Most of the men dressed in the same T-shirt and armed with iron batons.

They started smashing tables, chairs, and multiple objects at the eatery.

Many of them also attacked employees and diners.

The group of armed men ride motorbikes along a street in Ho Chi Minh City on June 5, 2020 in this screenshot taken from CCTV.

CCTV footage showed that most of the victims managed to run away.

One man fell on the floor and was caught in the middle of the rampage, but he only suffered some minor injuries.

The group of men eventually left the venue.

Police are now expanding their investigation and hunting for the rest of the suspects.

A source close to Tuoi Tre (Youth) newspaper stated the incident arose from a conflict between two local gangs.