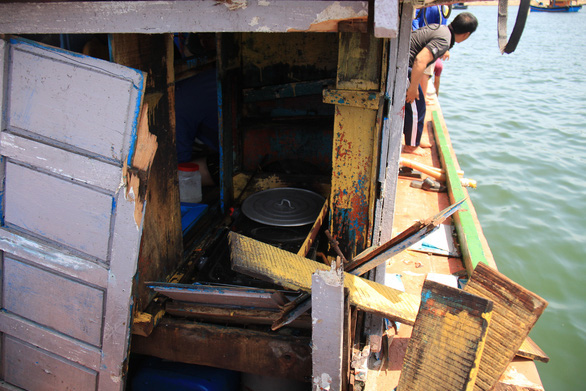 The Vietnam Fisheries Society (VINAFIS) has voiced its condemnation and objection after a Chinese coast guard ship had rammed a Vietnamese fishing boat and taken the fishers’ belongings while they were operating in Vietnamese waters.

VINAFIS expressed its opposition in a document submitted to the Government Office, the Party’s Commission for Foreign Relations, the Ministry of Agriculture and Rural Development, and the Ministry of Foreign Affairs on Saturday.

Reports from the fisheries society in the central province of Quang Ngai showed that the incident happened at around 10:00 am on Wednesday.

The Chinese ship began attacking the Vietnamese fishing boat and forced the fishers to sign some documents written in Chinese with their fingerprints.

The Chinese coast guard officers then took a large volume of seafood, fishing tools, and equipment worth approximately VND500 million (US$21,450) from the fishermen.

The fishing boat returned to the mainland on Friday and reported the incident to local authorities.

The fishermen are now in quarantine in Quang Ngai’s Binh Son medical center in accordance with COVID-19 prevention regulations, according to the Vietnam News Agency.

China has been repeating such actions for many times, causing insecurity and discontent among Vietnamese fishermen and resulting in serious economic losses for the victims, the VINAFIS asserted.

The fisheries society condemned and objected to the inhumane actions of the Chinese coast guard as it had endangered the Vietnamese fishermen while they were legally operating in Vietnamese waters.

The VINAFIS asked Vietnamese authorities to take assertive measures to prevent similar incidents from recurring, while demanding Chinese compensation for the victims’ losses.

Maritime patrols and protection must be strengthened to ensure the safety of local fishermen as well as their property, the society underscored.