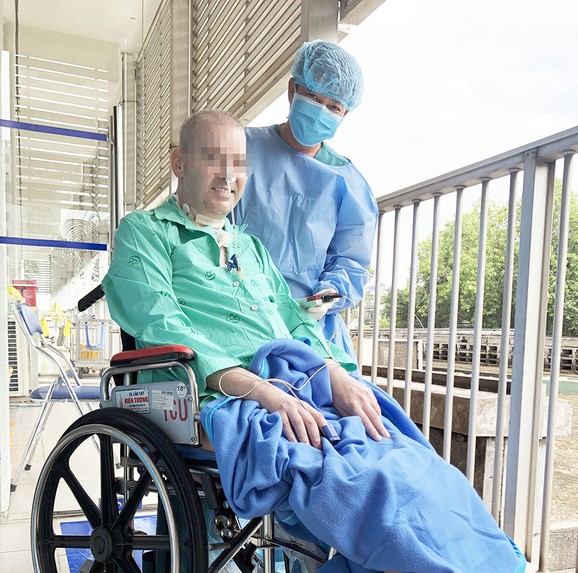 A British pilot, Vietnam’s most critically endangered novel coronavirus disease (COVID-19) patient, has been moved out of the intensive care unit (ICU) at a Ho Chi Minh City hospital and is now able to arm-wrestle with his doctor in the institution’s physical rehabilitation ward.

The Briton was transferred from the ICU to the physical rehabilitation unit of Cho Ray Hospital on Sunday.

Doctors are now focused on helping the patient fully restore his physical function.

He is now able to practice walking with medical staff’s help, brush his own teeth, talk, and smile.

He also arm-wrestled with Dr. Tran Thanh Linh, deputy head of the ICU ward, on Sunday.

The patient is expected to be discharged from the hospital and return to his home country soon.

His conditions became worse and worse then, with the pilot being on the verge of death many times.

But medical workers refused to let him die, trying every possible way to keep him alive, even with life support outside his body, known as the ECMO technique.

Their efforts paid off as he was then cleared of the coronavirus, though his lungs were badly damaged.

He was transferred to Cho Ray Hospital in the same city on May 22 in a coma.

The sole purpose of the hospital transfer was for doctors to perform a lung transplant on the Briton, which was believed to be the only way to save him at the time, said Dr. Phan Thi Xuan, head of Cho Ray Hospital’s ICU ward.

“It would be much better if he was able to keep his lungs as a transplant could be very risky. Doctors decided to use three types of medicine at the same time to treat his lung infection and gradually lower the doses of sedative and muscle relaxant,” Xuan elaborated.

The treatment proved effective as the patient’s lung capacity improved from only 10 percent in mid-May to 90 percent as of last week.

The patient’s insurance company confirmed on Monday it had paid approximately VND3.5 billion (US$150,600) for his medical treatment at the Hospital for Tropical Diseases from March 18 to May 22.

Vietnam’s COVID-19 tally stood at 349, with 327 having recovered as of Monday morning, according to Ministry of Health statistics.

The country has not reported any community infections in the past 67 days.