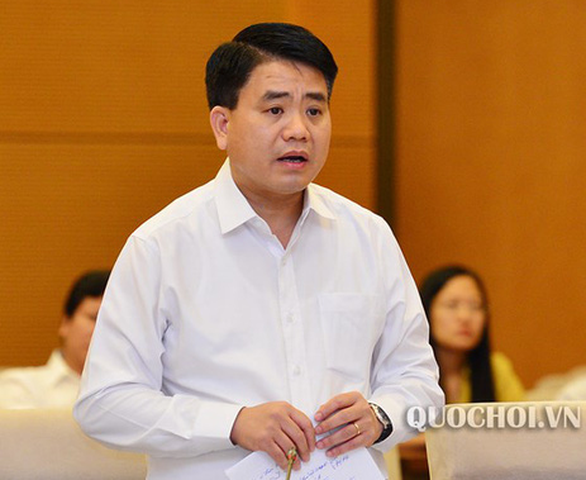 Prime Minister Nguyen Xuan Phuc on Tuesday signed a decision to suspend Hanoi chairman Nguyen Duc Chung from work over his responsibility in some cases.

Chairman Chung’s suspension will last 90 days, according to the decision.

An investigation is underway into his role in a few cases in accordance with the law.

He has been chairing the People’s Committee of Hanoi since December 4, 2015.

He was deputy chief of the investigative bureau of the Hanoi Department of Police from November 2001 to October 2004.

He served as chief of the criminal bureau of the police department from December 2007 to September 2010.

Chung was deputy director of the municipal police department while still heading the criminal bureau from September 2010 to March 2011.

He became a lawmaking National Assembly deputy and a member of the legislature’s judicial committee in May 2011.

He was named director of the Hanoi Department of Police in September 2012.

The prime minister promoted him to major general in July 2013.

He was elected as deputy secretary of the Hanoi Party Committee in November 2015. The Politburo has also suspended him from this title.

An exclusive source told Tuoi Tre (Youth) newspaper in July that Chung’s chauffeur and two other suspects had been arrested for “appropriating documents containing state secrets,” in relation to the so-called Nhat Cuong case, referring to a technology firm and mobile phone vendor in the Vietnamese capital.

Nhat Cuong’s general director, Bui Quang Huy, is facing accusations of heading a ring that smuggled a huge amount of electronic equipment and concealed revenue to the tune of trillions of Vietnamese dong. (VND1 trillion = US$43 million)

Huy has also been charged with “violating accounting regulations, resulting in serious consequences” and “money laundering.”

He has fled Vietnam and been wanted internationally since May 2019.