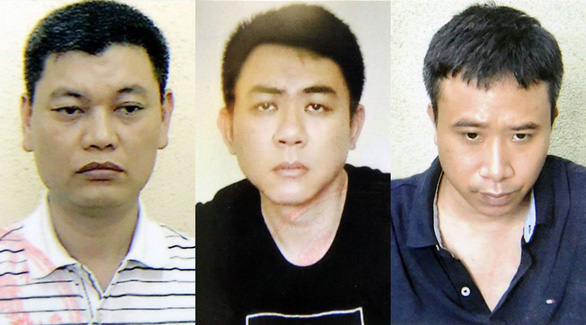 The personal driver of Nguyen Duc Chung, chairman of the Hanoi People’s Committee, has been arrested for appropriating classified documents related to a smuggling and money laundering scandal.

Police officers from the Ministry of Public Security had apprehended three suspects, including a policeman, in association with the appropriation, a exclusive source told Tuoi Tre (Youth) newspaper on Wednesday.

Ngoc works in the secretarial office of the assistance team of the Hanoi People’s Committee.

Trung is Chung’s chauffeur and an officer in the secretarial division of the Office of the Hanoi People’s Committee.

The last suspect is identified as Pham Quang Dung, 37, who resides in Thanh Tri District, Hanoi.

Dung serves as an officer at the anti-corruption and smuggling division (C03) under the Ministry of Public Security.

The three are charged with “appropriating documents containing state secrets,” in relation to the so-called Nhat Cuong case, referring to a technology firm and mobile phone vendor in the Vietnamese capital.

On July 13, police officers searched the houses and workplaces of the three suspects as they were accused of stealing the classified documents, as per Article 337 of Vietnam’s 2015 Penal Code.

Police have indicted over 20 suspects, including Hanoi officials, for “smuggling” and “violating accounting regulations, resulting in serious consequences.”

Nhat Cuong’s general director, Bui Quang Huy, is facing accusations of heading a ring that smuggled a huge amount of electronic equipment and concealed revenue to the tune of trillions of Vietnamese dong. (VND1 trillion = US$43 million)

Huy has also been charged with “violating accounting regulations, resulting in serious consequences” and “money laundering.”

He has fled Vietnam and been wanted internationally since May 2019.