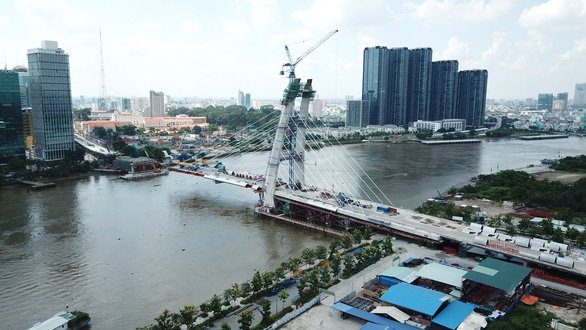 The project to build Thu Thiem 2 Bridge connecting District 1 and District 2 in Ho Chi Minh City is falling further behind schedule due to delays in site clearance.

Work on the Thu Thiem 2 Bridge started in 2015 and was initially slated for completion in 2018.

The project remains incomplete as of September 2020, with only roughly half the length of the cable-stayed bridge completed on the District 2 side.

The 885.7-meter-long Thu Thiem 2 Bridge, which spans the Saigon River, is designed to have a main support tower 113 meters high and six lanes for traffic.

On the District 1 side, the structure connects to Ton Duc Thang Street near the Ba Son Shipyard while on the District 2 side it will link to the Thu Thiem new urban area.

The VND3.08 trillion (US$133.4 million) project is expected to ease traffic congestion on the Saigon River Tunnel and the Saigon Bridge — the two current major traffic links connecting the city’s downtown and District 2.

According to recent calculations by the People’s Committee of District 1 and the project’s investor Dai Quang Minh Corporation, the bridge was slated for completion in September 2021 if the handover of cleared sites could be completed early in September.

But even the new deadline now seems impossible as site clearance in the area next to the Ba Son Shipyard remains unfinished as of Friday.

Currently, a part of Ton Duc Thang Street in District 1 has been fenced off for the construction of pillars.

Only 60 percent of the total workload has been completed so far, mostly on the District 2 side.

Construction of the bridge deck has had to stop after reaching the middle of the Saigon River to wait for site clearance on the other bank.

Facing the slow progress of the project, state auditors have proposed that the People’s Committee of Ho Chi Minh City adjust the project’s deadline once again.

The municipal administration has also asked to direct relevant agencies to urgently complete the site clearance and technical infrastructure relocation so as to soon hand over the site to the investor.