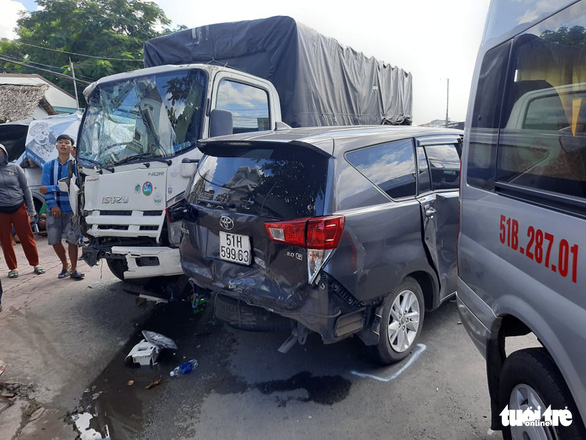 A serial crash occurred in the Mekong Delta province of Tien Giang on Sunday, with a truck, two passenger buses, and four cars colliding before running into a beverage stall and several houses along National Highway 1.

The accident happened at around 9:00 am in Hoa Khanh Commune, Cai Be District, local police confirmed.

According to preliminary information, a truck was running on the highway toward the Trung Luong-My Thuan direction.

It was controlled by a 37-year-old driver, Nguyen Van Loi, a native of An Giang Province, at the time of the accident.

When passing the section of Tien Giang Province, it suddenly hit a four-seater car, leading to serial collisions with a 16-seat passenger bus, another four-seater car, and a seven-seater vehicle in the same direction.

Due to the strong crash, the seven-seater car slid and ran into a 16-seater passenger bus and another seven-seater car, causing the two cars to smash into a drink vending stall and some houses along the highway.

After the pile-up, the seven vehicles were badly damaged but there were no casualties recorded.

Traffic police rushed to the scene immediately to investigate the cause of the accident and regulate the traffic.