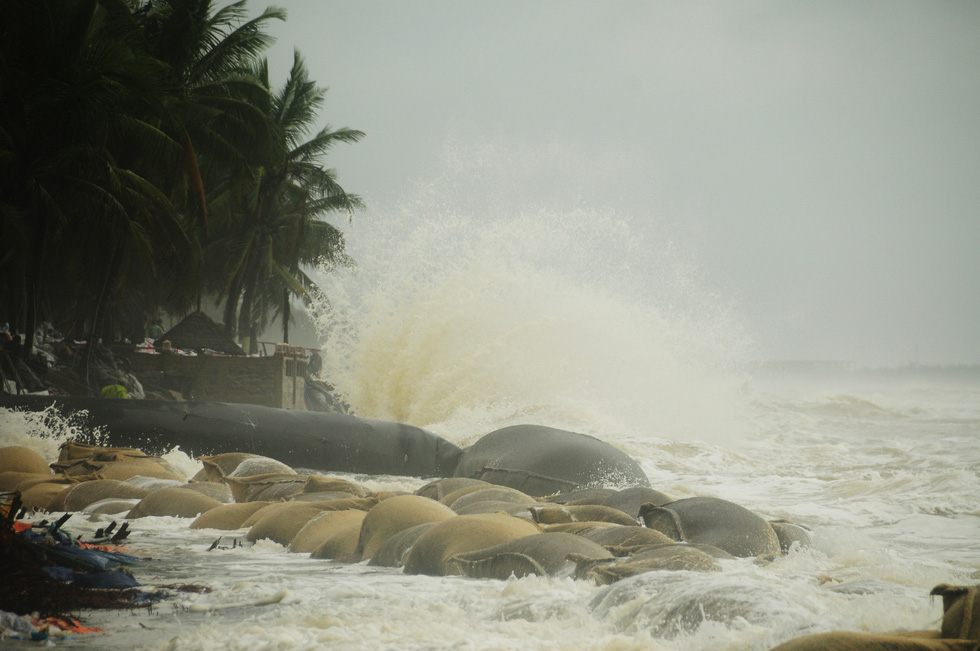 Thousands of civilians and soldiers in Hoi An City, located in the central province of Quang Nam, have exerted themselves to strengthen ocean banks along the famous tourist city’s coast, which have been threatened by unusually strong waves.

From Monday afternoon to early Tuesday afternoon, military forces, police officers, local authorities, enterprises, and civilians worked restlessly, using machines and sacks of sand to form a temporary revetment to absorb the energy of incoming water and protect the coast against the high waves.

Despite the great effort, hundreds of coconut trees had been knocked off by the waves, and many concrete embankments of businesses had been washed out into the sea by mid-Tuesday.

As the newly-made dyke failed to block the strong waves, one kilometer of Hoi An’s coastline from An Bang beach in Cam An Ward to Cua Dai Ward where resorts and tourism businesses are concentrated was badly shattered.

The destruction happened rapidly within only a few hours.

Landslides triggered by strong waves have been Hoi An’s chronic problem despite some measures to deal with them.

Currently, local authorities have directed volunteers and civilians to join hands with military and public security forces to continue reinforcing the coast before Tropical Storm Saudel, which is heading for the central region of Vietnam after soaking the Philippines.

Extreme weather has battering the central region with deadly flash floods and landslides since the beginning of October.