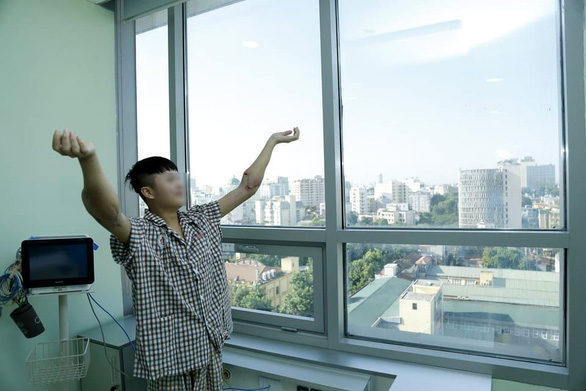 A surgical team at the 108 Military Central Hospital in Hanoi has managed to perform a hand replantation for an 18-year-old who lost his hands three years ago.

The organs were harvested from a deceased donor, who had agreed to give away his lungs, liver, kidneys, and heart after facing brain death.

This is the second time the hospital has carried out a limb replantation from a brain dead patient, with the first operation dating back to January, according to Mai Hong Bang, director of the hospital.

The transplant patient lost his hands in an explosion in a chemistry lab three years ago.

The accident greatly impeded his education as well as his daily routines.

Prof. Dr. Nguyen The Hoang, deputy director of 108 Military Central Hospital and chief surgeon in the replantation case, said this surgery proved to be more challenging, as the donor and the recipient have different blood types, O and A, respectively.

As the recipient faced more limb damage than the previous patient, replantation had to be made near the elbow rather than near the wrist as in the January case.

The surgery was conducted over eight hours, which was only half the time of similar surgeries that Hoang used to perform in Germany, the doctor revealed.

The patient was discharged from the hospital only three weeks after the surgery and is waiting to receive physiotherapy to start rehabilitation with his new hands.

The physiotherapy sessions will last about 1-1.5 years with the rate of recovery as high as 80-90 percent, doctors anticipated.

Organs obtained from the same donor were used to save a total of six patients.

While the lungs went to a patient with pulmonary fibrosis, the liver was donated to a person facing acute liver failure caused by hepatitis B.

His livers helped save two patients in the final stage of kidney failure, while the heart benefitted a patient on the waiting list at the Vietnam-Germany Hospital in Hanoi.