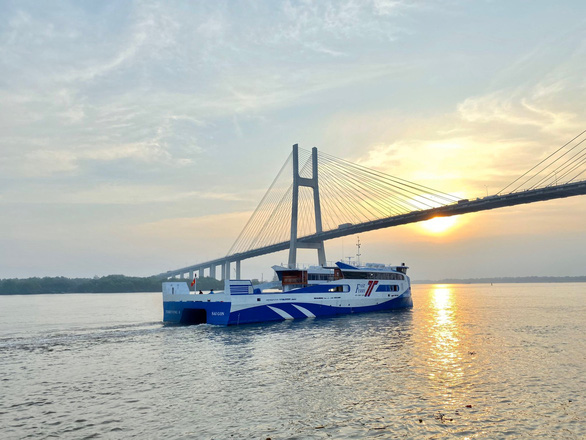 Can Gio-Vung Tau ferry to open this month

A ferry between Ho Chi Minh City’s Can Gio District and Vung Tau City in the southern province of Ba Ria-Vung Tau will be put into service by December 29, the Ho Chi Minh City Department of Transport said on Wednesday.

Speaking at a meeting on the progress of the ferry project on Wednesday afternoon, Nguyen Quoc Chanh, director of Quoc Chanh Company, the project developer, said that the ferry terminals at both ends of the Can Gio-Vung Tau route are completed and the firm is expediting the necessary paperwork to put its ferry into operation.

Prior to the inauguation scheduled for December 29, the ferry’s test run will take place on December 25, Chanh said.

A one-way journey along the Can Gio - Vung Tau ferry route is about 15 kilometers long and will take approximately 30 minutes.

Each ferry will be able to carry more than 250 passengers, 100 motorbikes, and 15 automobiles.

About 24 trips will be operated per day.

According to the Ba Ria – Vung Tau Department of Transport, road infrastructure near the ferry terminal in Vung Tau will be upgraded to facilitate the operation of the port.

It was originally scheduled to open on April 30, but the date was pushed back due to the impact of the COVID-19 pandemic.