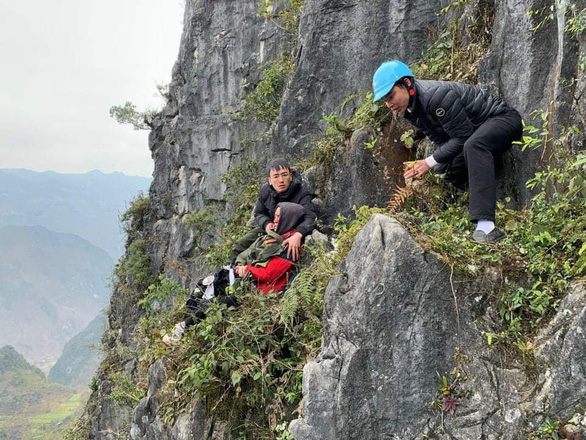 Authorities in Meo Vac District under Vietnam's northern province of Ha Giang have banned tourists from approaching and taking photos at a local cliff after a tourist fell from it last week.

The ban was confirmed by Ly Van Dong, chairman of the Pai Lung Commune People’s Committee in Meo Vac, during an inerview with Tuoi Tre (Youth) newspaper on Wednesday.

Dong cited the precariousness of the location, as well as an increased slip risk from recent foggy weather, as reasons for the ban, which is expected to last until a specific solution is in place.

“We are waiting for directions from the administration of Meo Vac District on ensuring safety for tourists walking the highly challenging path to the cliff,” Dong said.

The locale had never seen any fall from the cliff before last week, but local authorities had set up two warning signs on the way up as precautionary measures since 2019, he revealed.

The victim, 29-year-old Mai Thuy H. from Son La Province, is still being treated at a local hospital for multiple injuries, including a pelvis crack and several lesions on one of his legs.

Recalling the situation, H. said he was on a road trip to see frost in Cao Bang Province, and decided to drop by Ha Giang to take photos at the 'death cliff' on the way home.

“I went to the furthest end of the cliff to take pictures, but the cold weather numbed my limbs," H. recollected.

"As I look far beyond, I felt stunned, then tripped and fell off the cliff.

“I came round after falling down about 25 meters and managed to cling to a small tree branch.”

Subsequently, his companion reached local authorities and residents, who helped rescue and bring H. to the hospital as he lost consciousness again from excessive blood loss.

After surviving the accident, H. hopes other tourists will prioritize their own safety while traveling.