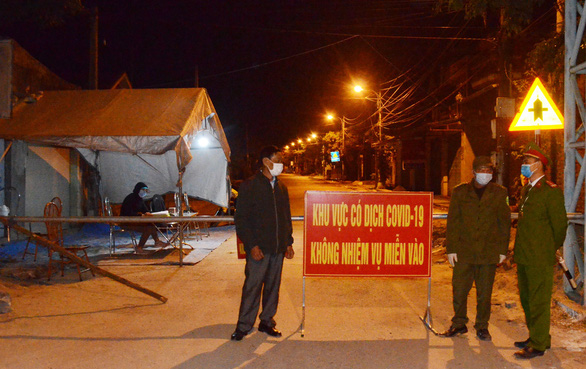 Of the two patients in Quang Ninh, one patient, who resides in Ha Long City, had connection with a previously-confirmed patient in Hai Duong, while the other patient, who lives in Van Don District, came into contact with patient No.1,553.

The remaining 32 patients in Hai Duong had epidemiological connection with a cluster in Chi Linh City.

Vietnam has reported 185 infections in the latest coronavirus outbreak, which began on Thursday and has spread to five northern cities and provinces, including Hanoi.

The national tally mounted to 1,739 patients, with 1,448 recoveries and 35 virus-related deaths as of Saturday morning.

Authorities are conducting quick and extensive contact tracing to contain the new wave of infections, at a time when the Lunar New Year holiday, Vietnam’s biggest festival, is only two weeks away.

Following the morning update on new infections, the Ministry of Heath revealed details of a new vaccine that will soon be available nationwide.

Minister of Health Nguyen Thanh Long said on Saturday morning that the ministry had approved the use of the AstraZeneca vaccine.

This is the first inoculation licensed for distribution in Vietnam.

AstraZeneca has committed to provide 30-50 million doses in 2021, 50,000 of which should be available in Vietnam in February, according to the health ministry.

A source familiar with the matter told Tuoi Tre (Youth) newspaper that AstraZeneca sells the vaccine to Vietnam for less than US$10 per two injections on the not-for-profit principle.