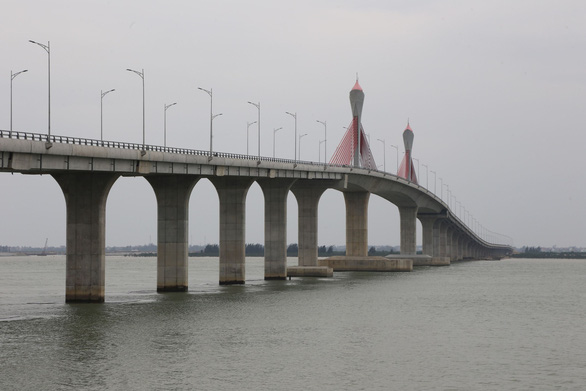 The Cua Hoi Bridge connecting the north-central Vietnamese provinces of Nghe An and Ha Tinh has allowed the circulation of rudimentary vehicles, motorcycles, scooters, cars under 15 seats and trucks under 1.5 metric tons since Saturday for its temporary operation of over a month.

The maximum vehicle speed permitted is 50km per hour.

All vehicles will be banned from the newly-built bridge after March 15 to facilitate construction of remaining works of the project, according to the Ministry of Transport’s announcement on Friday night.

The ministry requested people abide by the rules, the traffic organization plan and the instructions of the relevant authorities when traveling on the bridge.

Construction began on the Cua Hoi Bridge spanning the Lam River and connecting Cua Lo Town in Nghe An with Nghi Xuan District in Ha Tinh on February 12, 2019, with a total investment of VND950 billion (US$41.14 million), including VND450 billion ($19.5 million) of government bond and VND500 billion ($21.7 million) from the two provincial budgets.

The project has a total length of more than 5.3km, with the main bridge of 18.5m wide and the auxilary road of 16m wide.

The main span of the bridge is built with a balanced cantilever cable structure.

The project has been basically completed, according to the transport ministry’s report.

Only a 1.1 km section at the southern end of the bridge in Nghi Xuan District, Ha Tinh is still under construction.

The Ministry of Transport has instructed the project’s management board  and the construction contractors to complete the structural layer of the road that is facing the problem of soft ground to ensure convenience and safety for people and vehicles during the temporary operation of the bridge until March 15.