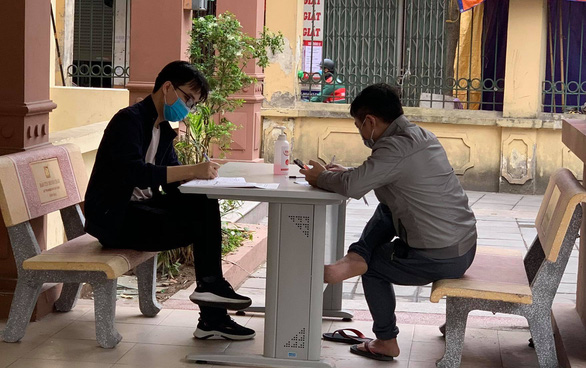 Health authorities in Hanoi have proposed the purchase of 15 million COVID-19 vaccine doses for a double inoculation plan, according to Hoang Duc Hanh, deputy director of the municipal Department of Health.

The proposition was announced during a teleconference on COVID-19 prevention chaired by Chu Xuan Dung, deputy chairman of Hanoi, and joined by ward-, commune- and district-level officials in the city on Monday.

The capital city’s Department of Health has consulted the municipal People’s Committee before sending the procurement proposal on COVID-19 jabs to the Ministry of Health, Hanh said.

As suggested by the proposal, double inoculation will benefit city residents that are over 18 years old, he added.

Hanh reported that the infection risk remains high even though Hanoi has not reported any new case for almost a week, and transmission is generally kept under control.

He pointed to the host of returnees to Hanoi from other provinces after the Lunar New Year holiday, which ended last week, who have yet to be thoroughly monitored via medical declarations, as a potential source of transmission.

Officials will continue monitoring the COVID-19 situation until the end of the week before deciding on the potential resumption of schools, as well as changes to social distancing rules and festival activities.

Hanoi has so far screened 51,595 returnees from the COVID-19 epicenter of Hai Duong Province, with 49,637 sampled for testing and 40,672 receiving negative results, Nguyen Khac Hien, director of the Department of Health, said in a meeting chaired on Monday by Vuong Dinh Hue, secretary of the Hanoi Party Committee.

The number of returnees from outbreak sites to submit health declaration forms as required will continue to rise in the next few days, Hien said.

According to Hien, lockdowns were already lifted from 14 out of 18 areas considered at high risk of COVID-19 transmission in Hanoi, while the four remaining locations are on track to get the medical blockage cleared by March 1.

Meanwhile, Hue recognized the positive results in epidemic prevention that are helping local businesses and local residents return to normal.

Keeping a vision of long-term co-existence with the virus in mind, the municipal Party Committee required lower-level officials to abide by COVID-19 prevention guidelines, as well as reviewing the drawbacks in implementation to keep up with the circumstances.

Vietnam has recorded 2,403 COVID-19 cases as of Wednesday morning, with 1,760 recoveries and 35 deaths, according to the Ministry of Health.

A total of 811 local infections have been detected in 13 provinces and cities since January 27.