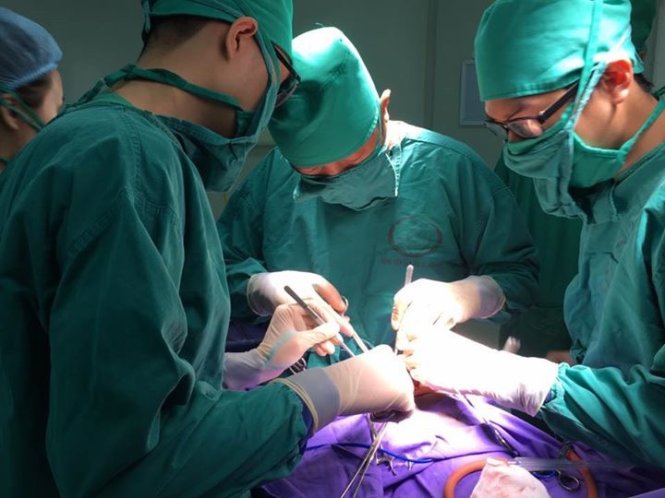 A newborn baby has gone through a successful surgery in Ho Chi Minh City to remove a parasitic twin from her abdomen.

The one-day-old baby suffered from a condition called ‘fetus in fetu’ -- a rare congenital anomaly with an incidence of 1:500,000 births that is characterized by the incorporation of one or more partially-developed fetuses into the body of an otherwise normally developed fetus.

Doctors at Tu Du Maternity Hospital discovered a tumor with unknown characteristics that had grown quickly in size inside the fetus’ abdomen when she was in her mother’s womb.

The baby was born prematurely at Tu Du at 36 weeks, weighing 3.4 kilograms, a representative of the Children's Hospital 2 in District 1 said on Tuesday.

Following her birth, the newborn got her abdomen distended and suffered respiratory failure, so she had to be intubated.

She was then transferred to the Children’s Hospital 2 for further treatment.

Medical examination results showed that the tumor inside the baby’s abdomen had grown large, containing a fetus-shaped mass with the bony outline of shoulder blades, a spine, limbs, and a working blood supply from the host.

The tumor is indistinguishable from the ‘fetus in fetu’ condition, doctors affirmed.

Surgeons thus decided to remove the malformed fetus from the baby girl.

The surgery was successfully completed after an hour and a half, with the child patient’s respiratory condition improving remarkably.

The baby girl was then transferred to the neonatal resuscitation department.

Currently, she is in good health and has been discharged from the hospital.

According to medical experts, a child patient with ‘fetus in fetu’ conditions has to be medically monitored for at least three years after surgery.