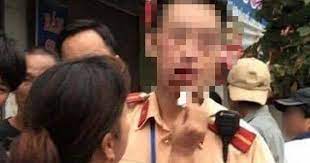 Police in the northern Vietnamese province of Bac Giang have taken a motorbike driver into custody for driving under the influence before assaulting two traffic police officers.

Local traffic police officers were responding to an accident involving motorcyclists Tran Nhat Minh, 62, and H.V.D., 39, on Than Nhan Trung Street at around 2:30 pm on April 11, according to a statement issued by provincial police on Thursday.

During his interactions with officers, Minh refused to obey orders and began exhibiting signs that he was under the influence of alcohol.

He then punched two of the traffic police officers in the face before throwing an elbow at one and kicking the other, leaving both officers bloody and bruised.

A blood alcohol concentration (BAC) test showed that Minh’s level was at 1,096 milligrams per liter.

He is currently being investigated for obstructing officials performing duties.

According to Vietnam’s current regulations, all car and motorbike drivers must have a BAC level of zero.