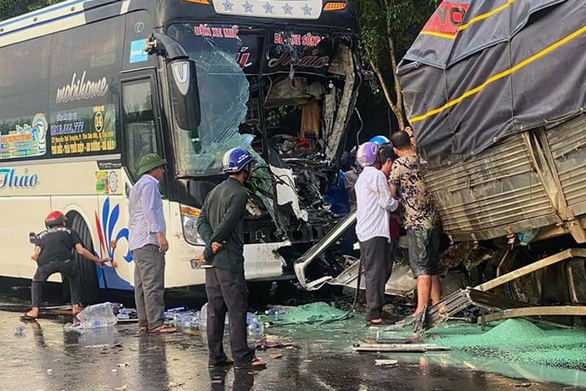 A sleeper bus hit a truck head-on, killing the truck driver and seriously injuring the bus driver on the section of National Highway 14 passing through Bu Dang District in southern Binh Phuoc Province on Friday afternoon.

The collision occurred at around 4:30 pm Friday.

The sleeper bus allegedly encroached the opposite lane as its driver, 36-year-old Le Duc Hoang from the Central Highlands province of Dak Lak, tried to overtake another vehicle in the same direction.

At that time, Tran Vu Phong, a 41-year-old man in Binh Phuoc, failed to control his truck, which was running on the opposite lane, to avoid the sleeper bus.

After a strong crash, the front parts of the two vehicles were dented deeply and stuck together.

The two drivers were trapped in their cockpits and seriously injured.

Some passengers on the sleeper bus also suffered a few cuts and bruises and a state of panic.

The two drivers were quickly taken to hospital for emergency treatment.

Traffic police officers also swiftly arrived at the scene to examine and investigate the cause of the fatal accident.