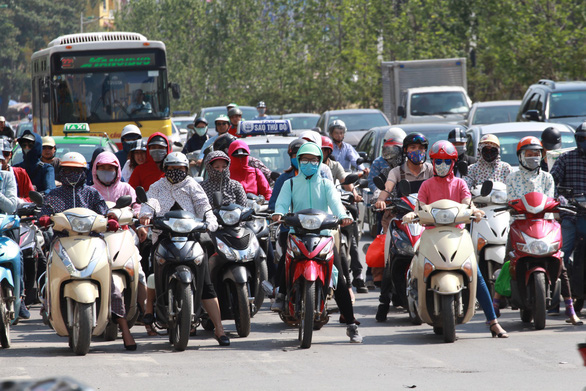 Northern Vietnam will experience a scorching heat for a week from Monday, while the Central Highlands and southern regions will have rainstorms in the evenings, the central weather agency forecast on Friday.

The country’s northwestern and central mountainous regions will see the highest temperatures ranging from 35 to 37 degrees Celsius on Monday, the National Center for Hydrometeorological Forecasting said.

Some places may feel temperatures of over 37 degrees Celsius.

Such weather patterns resulted from a hot low-pressure area that is developing and expanding to the southeast, the center reported.

From Tuesday, the scorching heat will cover the entire northern region and most of the central part, with the highest temperature of up to over 39 degrees Celsius in some areas.

In these regions, the heat of over 35 degrees may last for up to 17 hours per day, while the lowest daily relative humidity may reach 60 percent.

The Hanoi area will see the highest mercury of up to 38 degrees Celsius in some places.

The center warned that this heatwave is likely to prolong until May 16.

Meanwhile, the Central Highlands and southern regions will experience sunlight during the day and thunderstorm rains in the evenings and at night-time from Sunday until Thursday.

Rainstorms in the Central Highlands may bring lightning, whirlwinds, and strong gusts, the center warned.

The same weather pattern is forecast to continue in these regions from May 14 to 18.