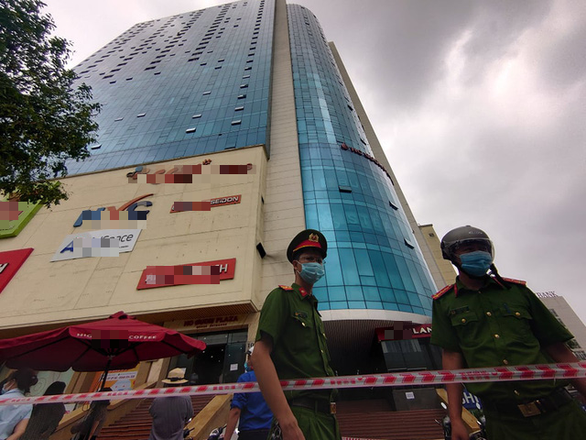 The director of a state-owned enterprise in Hanoi has been suspended from office and may be subject to police investigation after violating local regulations on COVID-19 prevention and control.

Nguyen Van Thanh, director of Hanoi Construction and Investment Company No. 2 (Hacinco), has been temporarily relieved of his post for such violations after returning from his four-day public holiday from April 30 to May 3.

The suspension was imposed on him by the Hanoi Housing Development and Investment Corporation (Handico), the parent company of Hacinco, on Thursday, after Thanh was found not having made medical declaration when he and his wife returned home from Da Nang, a central city affected by the COVID-19 outbreak.

One day earlier, Thanh and his wife, who reside in an apartment of the Center Point building in Hanoi’s Thanh Xuan District, both tested positive for novel coronavirus at Huu Nghi Hospital in the capital city.

Authorities have locked down the building after the couple’s testing results were confirmed.

Handico has required that all staff members who returned to Hanoi after the holiday from virus-hit areas isolate themselves at home, make health declaration, and work from home for 14 days starting from May 4, said Pham Tien Duc, the company's general director.

Duc also cited the directive signed by the Hanoi People Committee early this month requesting all locals returning the capital after the holiday to declare their health status, online or directly, to authorities.

However, Thanh did not comply with the requirements.

As a result, six board members of Hacinco have become his direct contacts, among many others.

At a meeting held on Thursday afternoon with district leaders to review pandemic prevention efforts, Hanoi chairman Chu Ngoc Anh mentioned Thanh’s violation and requested that it be strictly dealt with.

“This violation has to be handled very seriously,” Anh said.

After returning to Hanoi, Thanh went to numerous places for parties and meetings while local authorities have been discouraging public gatherings.

“Thanh even played golf during working hours,” the chairman said.

Preliminary contact tracing results showed that nearly 200 people had come into contact with Thanh before he was found contracting the virus, and many places where he had visited have been locked down, the city’s leader added.

The Hanoi Center for Disease Control on Thursday reported that two among the direct contacts of Thanh have tested positive for the virus.

One of the two is a 42-year-old man residing in Hanoi’s Ha Dong District and the other is a 40-year-old man living in the same district.

“If more positive cases are detected, in addition to administrative measures, I request that police take part in the handling of this case,” Anh stated.

Can Thi Viet Ha, chairperson of the Ha Dong People’s Committee, said that 24 direct and 24 indirect contacts have been linked to these two cases.

The direct cases have been put in centralized quarantine while the indirect have been isolated at home, Ha said.

Hoang Duc Hanh, deputy of the Hanoi Department of Health, warned that there may be many direct and indirect contacts traced to the Hacinco director as he had traveled to many places before being confirmed as a coronavirus patient.

“This cluster therefore poses a huge risk of spreading the disease to the community, so we must try to trace it as soon as possible,” Hanh noted.

Vietnam has recorded 3,756 local and imported coronavirus infections so far, including 2,657 recoveries and 35 deaths, according to the health ministry’s data.

The nation has confirmed 729 domestic cases since April 27, when it logged the first locally-infected patient after having gone about a month without detecting any community transmission.