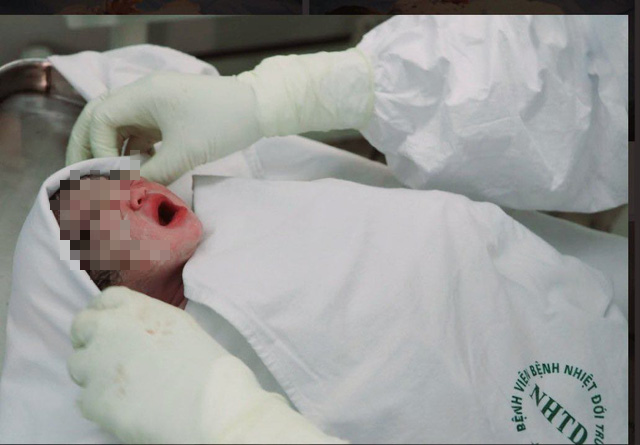 Obstetricians at the National Hospital for Tropical Diseases in Hanoi last week successfully delivered a baby through a caesarean section performed on a woman with COVID-19, who had previously suffered infertility for 11 years.

Hailing from northern Dien Bien Province, Q. was admitted to the National Hospital for Tropical Diseases on May 19 at her 35th week of pregnancy after her test results returned positive for the coronavirus on May 14.

Earlier, she had run a fever accompanied by coughing, a sore throat, sputum, and fatigue, and had been tested for COVID-19 at the field hospital of Dien Bien Province on May 13.

It was determined that the woman had come into direct contact with COVID-19 patient No. 3,758 on May 4.

The woman had been helped to get pregnant through in vitro fertilization previously.

Doctors at the National Hospital for Tropical Diseases transferred the pregnant patient to the emergency department and held a consultation.

They came to the conclusion that she suffered from respiratory failure caused by COVID-19 infection and fetal distress.

Surgeons decided to conduct a caesarean section before her full term, fearing adverse impacts on the baby if the mother’s respiratory failure deteriorated and required mechanical ventilation, according to Dr. Nguyen Thu Ha, deputy head of the obstetrics and gynecology ward.

“It was the golden time to save the baby,” Dr. Ha said.

Doctors from the hospital’s emergency, obstetrics, pediatrics, and anesthetics departments were put together to coordinate and support the surgery, which took place for one hour and turned out to be a success.

After the medical operation, the baby was transferred to the pediatrics ward for care, while the mother was moved to the intensive care unit for further treatment.

Currently, the mother is sedated and mechanically ventilated, and treated with broad-spectrum antibiotics and vasopressors.