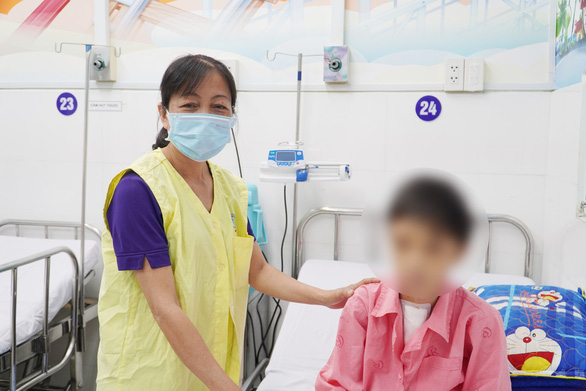 Doctors at Cho Ray Hospital in Ho Chi Minh City have successfully performed a complicated nine-hour operation to save the life of a 13-year-old child with a rare congenital heart disease that became severe and carried a mortality risk of up to 90 percent.

T.H.P., 13, was born with congenital heart disease and became more and more emaciated, malnourished, increasingly pale, and tired over time.

For many years, the child patient had been treated in many hospitals and cardiovascular centers in Ho Chi Minh City, with a diagnosis of truncus arteriosus -- a birth defect of the heart, in which a single common blood vessel comes out of the heart, instead of the usual two vessels.

According to the doctor, children with truncus arteriosus need early treatment and surgical intervention.

Without surgery within the first year after birth, the patients face a mortality rate of up to 90 percent, Van said.

But for various reasons, P. had been treated with medical therapy instead of surgery over the past years before being taken to Cho Ray Hospital.

As an operation, which was expected to be difficult, was the only solution in P.’s case, doctors at the hospital made thorough preparations and applied many complex techniques.

They separated the aorta and pulmonary artery before reconstructing the aortic root to ensure that the right aorta would come from the left ventricle and bring blood flow to the body.

After being weaned off extracorporeal life support and a ventilator, ten days postoperatively, the patient has been in stable health and is expected to be discharged in the next few days.

According to Dr. Van, the patient has almost returned to a normal life, with normal cardiovascular physiology like everyone else.

According to Suc Khoe & Doi Song (Health & Life), which is the mouthpiece of the Ministry of Health, the entire cost of P.’s surgery was covered by donations mobilized by the treatment team in coordination with the social work department of Cho Ray Hospital.