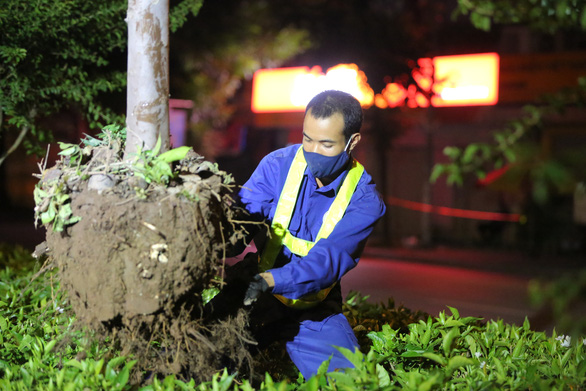 The state-owned Hanoi Green Tree and Park Company on Saturday evening uprooted dozens of red maple trees from the median strip of Nguyen Chi Thanh Street before transporting them to a garden for special care.

The company mobilized dozens of urban landscape workers, as well as a crane truck, to Nguyen Chi Thanh Street around 11:00 pm for the mission.

After being uprooted, tied and loaded onto a truck, the trees were shipped to a garden in Yen So Ward of Hoang Mai District.

Answering Tuoi Tre (Youth) newspaper, Nguyen Duc Manh, deputy director of the company, said the firm is planning to move all red maple trees on Nguyen Chi Thanh and adjoining Tran Duy Hung Street and give them proper care under the summer heatwave that has struck Hanoi in the past few days.

“We moved 30 red maple trees to a garden within Saturday evening, and are looking to uproot the rest during the next three or four days,” Manh said.

According to Manh, the company had displaced another 30 red maple trees on Friday evening.

The firm is considering the optimal plant variety that matches the terroir of Hanoi to supersede red maple trees on local streets.

Earlier, the municipal Department of Construction mentioned 'Bang' (Terminalia catappa) or oil palm trees as the replacement in their proposal to the municipal People’s Committee.

The new trees will be planted in the cooler months of August or September, Manh added.

The medians of the two streets in Dong Da and Cau Giay Districts have been landscaped with 262 red maple trees donated by a company since 2018, with the expectation that they would serve as beautiful and traffic-calming elements.

After over two years, 119 maple trees on Nguyen Chi Thanh Street and 143 maple trees on Tran Duy Hung Street have failed to adapt to the climatic conditions of Hanoi, showing poor growth, according to the construction department's review.

Of that, 45 maple trees died, while the alive trees have had leaves wilt and branches become dry.

They have been vulnerable to pests and diseases, affecting the landscape of the streets, the construction department reported.