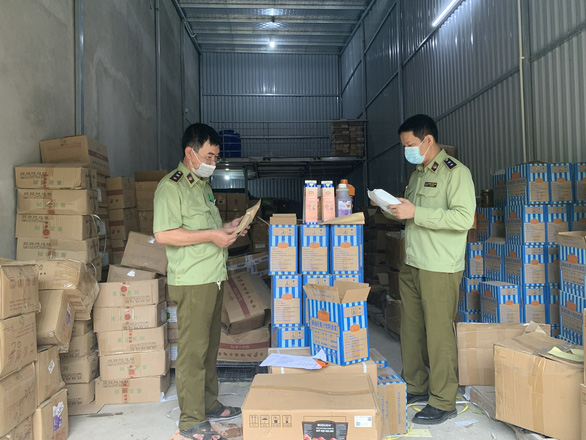 Police of Hanoi on Thursday raided a warehouse in Ha Dong District and impounded several tons of bubble tea ingredients without a trustworthy origin despite having famous brand names on the package.

The cargoes were seized at a warehouse at Le Khe Ward of Ha Dong District on Thursday afternoon after a raid implemented by local market surveillance officers.

The warehouse is being used by Mr. Drink Vietnam Co.Ltd., a firm headquartered in an urban area nearby.

The head of the company, Nguyen Huu Toan, was not present at either the office or the warehouse at the time of the bust.

Other personnel of the company were able to present certificates of origin, customs declaration and other related papers to prove legibility of several cargoes.

However, they could not prove the origin of the remaining products, including boba pearls, brown sugar grains and syrup, and boba tea powder packs stamped with well-known tea brand names of Royal Tea and Gongcha.

Most of the cargoes were stored in large cardboard boxes, many of which were unsealed and mold-laden.

Waste materials and stacks of information labels were also found scattered on the floor.

After preliminary inspection, the functional force found the cargoes with signs of contraband and commercial fraud.

The owner of the facility has repeatedly dodged monitoring efforts from the authority.

“The owner is sly enough to mix up goods with and without paperwork together, which threw our officials off.”

The surveillance unit is working to document the seized products and cross-check them with paperworks of origin to clear the case.