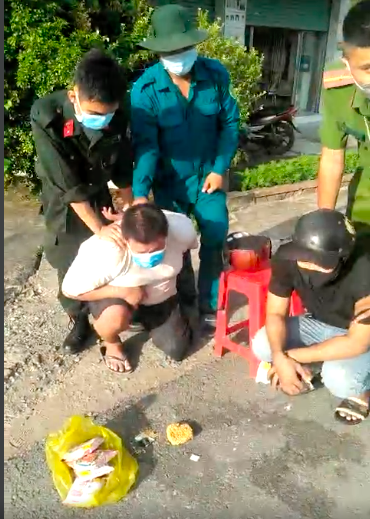 Officers at a COVID-19 checkpoint in southern Vietnam have arrested two men for trading narcotics after they were found stashing the illegal products inside packs of instant noodles.

The incident took place at the border of Ho Chi Minh City and Long An Province on Saturday afternoon, Long An police confirmed later the same day.

A man from Ho Chi Minh City came to the COVID-19 checkpoint and was not allowed to enter Long An as he lacked a required negative test certificate.

He then contacted another man from Can Giuoc District in Long An and told him to receive his delivery at the checkpoint.

Upon his arrival, the man from Long An took a plastic bag containing several packs of instant noodles and paid VND500,000 (US$21) to the man from Ho Chi Minh City.

As instant noodles cannot cost that much, on-duty officers felt suspicious about the two men.

They decided to inspect the delivery and discovered that narcotics were hidden inside the packs of instant noodles.

The suspects were then arrested for trading drugs.

A similar incident also took place at this checkpoint on Friday afternoon.

A man from Ho Chi Minh City headed to the site and left behind a box that was carefully wrapped up.

After being questioned by on-duty officers, he stated the box contained sugar.

The officers later found narcotics inside the box and apprehended the suspect.

Due to the serious COVID-19 pandemic, checkpoints have been established at all of Ho Chi Minh City’s entrances.

People can only pass them if they have tested negative for the novel coronavirus.

Vietnam has recorded 47,394 local infections in 58 provinces and cities since the fourth transmission wave broke out on April 27.

Ho Chi Minh City is the hardest-hit locality with 29,081 cases, while Long An has detected 746 cases in this bout.