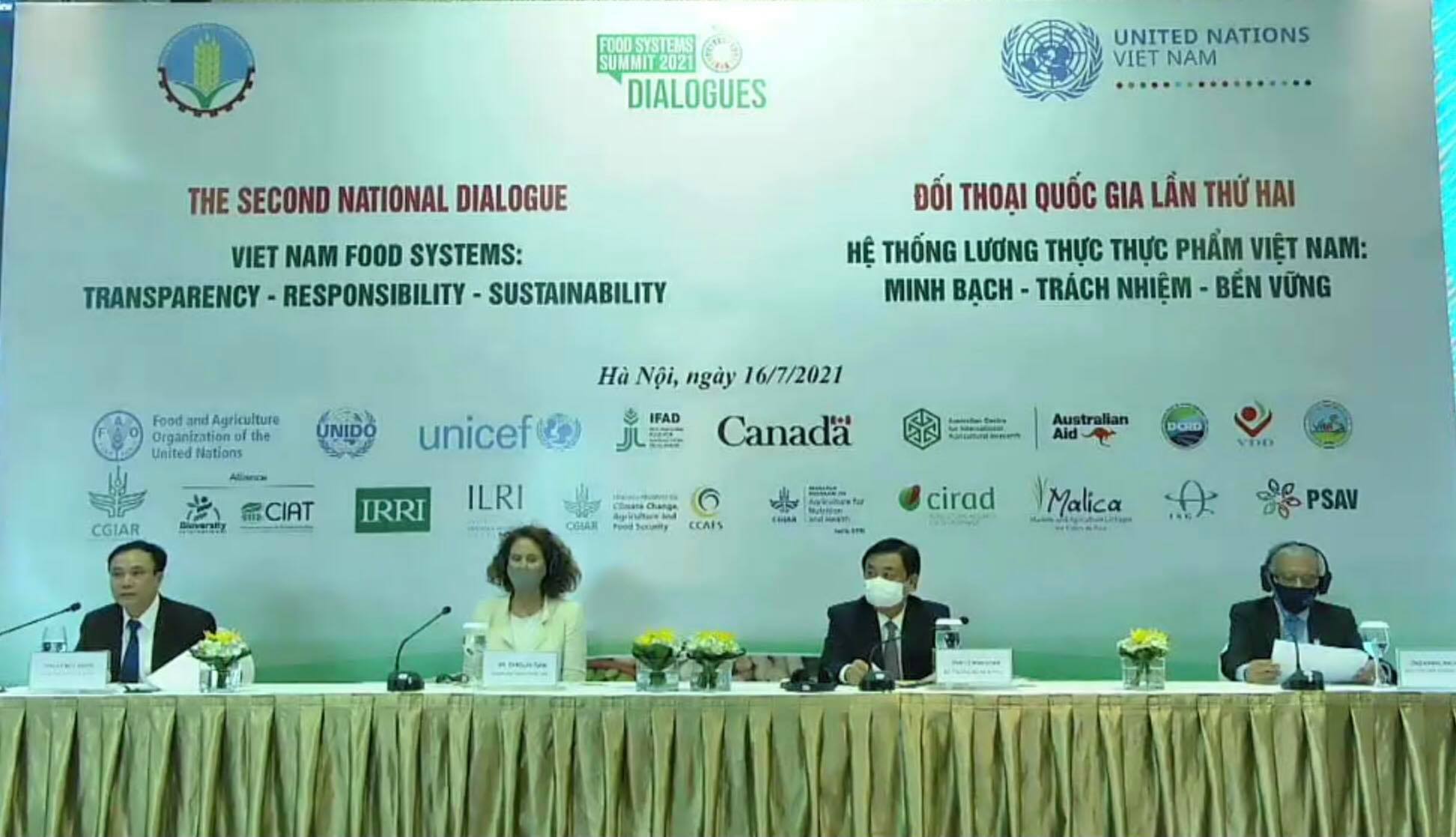 The Vietnamese Ministry of Agriculture, in cooperation with the United Nations and the World Bank, organized the second national food summit dialogue in Hanoi on Friday to discuss opportunities, challenges, vulnerabilities, and gaps affecting Vietnam’s national food systems.

The aim was also to prioritize action areas for the country in order to develop responsible, sustainable, and transparent food systems by 2030, according to a press release issued by the Swedish Embassy in Hanoi.

Chaired by Deputy Prime Minister Pham Binh Minh and Minister of Agriculture and Rural Development Le Minh Hoan, the event attracted the in-person and online participation of about 200 people.

The summit occurred following three subnational consultations in the northern, central and the Mekong Delta regions, which resulted in calls for collaborative action toward healthier and more sustainable food systems.

Under the theme ‘Vietnam Food Systems: Transparency - Responsibility - Sustainability,’ the national food summit dialogue came in preparation for the United Nations Food Systems Summit, which is set to be convened by UN Secretary General Antonio Guterres and take place in New York in September.

The UN Food Systems Summit was announced by Guterres on World Food Day in 2019 as a part of the Decade of Action and in support of Agenda 2030.

The aim of the summit is to contribute to progress on all 17 of the Sustainable Development Goals (SDGs) through a food system approach.

The goal is also to leverage food-system interconnectedness in the face of global challenges such as hunger, climate change, poverty, and inequality.

Speaking at the dialogue, Deputy Prime Minister Minh emphasized that the Vietnamese government is deeply aware of the need for close coordination between countries and actors in the food sector.

This is needed to bring about sweeping changes throughout the whole food system, he remarked.

“This will help Vietnam carry out better interventions in poverty reduction, food security, and nutrition in rural areas, bringing real benefits to vulnerable groups, ethnic minorities, women, girls, and children,” he was quoted as saying the press release.

“In addition, this is also an opportunity to connect and develop the value chain of Vietnam's key agricultural products in the direction of transparency, responsibility, and sustainability.”

Vietnam's agriculture plays a particularly important role in ensuring food security, social stability, and livelihoods for over 60 percent of the population living in rural areas and contributed 14.85 percent of the country's GDP in 2020.

Global climate change forecasts and real circumstances in recent years show that the Southeast Asian country is among those most heavily affected by climate change, he said.

“Functional sectors need to support farmers' organizations at the grassroots level as the core for linking agricultural value chains to ensure the balance of interests of farmers and other relevant stakeholders,” Hoan underlined.

Food and nutrition security remains a dilemma mainly due to unhealthy diets and food safety, according to Kamal Malhotra, United Nations resident coordinator in Vietnam.

Environmental degradation resulting from the overexploitation of resources and chemical usage are becoming more and more alarming, Malhotra said.

Inequalities in distribution, the inability to attract young workers, a lack of market connectivity, and the limited ability to manage production, processing, and goods circulation reduce the competitiveness of enterprises, agriculture, and the entire food industry.

"The United Nations in Vietnam and our agencies such as IFAD, FAO, UNICEF, UNIDO, and other relevant bodies will accompany the government of Vietnam, along with development partners, to transform the food system, contributing to the achievement of the sustainable development goals," said Malhotra.

The COVID-19 pandemic has revealed extreme inequities and inefficiencies in food systems which depend on thousands of food producers and processors, many of whom are living on very low incomes.

The pandemic came at a time when food systems were already under strain from natural disasters, such as floods and prolonged periods of drought, climate change, and other shocks.

Dr. Francisco Pichon, country director for the International Fund for Agricultural Development (IFAD) in Vietnam said that as a specialized agency of the UN system and an international financial institution, IFAD remains committed to supporting the government of Vietnam to achieve its vision of more inclusive and sustainable food systems.

The agency finances programs developed with important levels of domestic and international co-financing, with an emphasis on climate finance, and use of public resources to leverage responsible private investment in rural areas that respond to the needs of people and the planet.

“IFAD has an important comparative advantage as an agent of change in the agriculture and rural sector, as well as access to rural finance and development of last mile’s small-scale rural infrastructure for inclusive, pro-poor value chains.

“We target all our interventions at the poorer and more remote and underserved rural areas of Vietnam with a high concentration of ethnic minorities,” said Pichon.

“Pursuing a holistic and participatory approach to climate resilience, from planning to implementation at province, commune, and district levels and with the local government’s institutions always in the driver’s seat, has been instrumental to IFAD’s approach.”

“IFAD’s strategy in Vietnam over the past 20 years – delivered through 16 projects mobilizing an overall investment of US$500 million – has been characterized by thematic consistence, with a focus on supporting the government’s achievement of its key development objective to ‘invest in rural people’ and facilitating the transition from subsistence farming to climate-resilient and market-oriented rural productive activities.”

Despite the impact of the COVID-19 pandemic, climate change, and natural disasters, Vietnam's agriculture still kept a positive growth rate of 2.68 percet in 2020, according to the Ministry of Agriculture and Rural Development.

In 2020, the export turnover of Vietnam's agricultural, forestry, and fishery products reached $41.53 billion.

In January-June this year, the export of agricultural, forestry, and fishery products fetched approximately $24.23 billion.