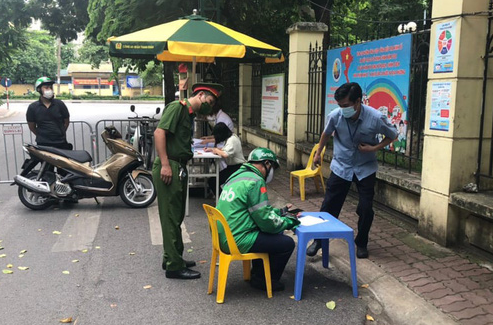 Approximately VND1 billion (US$65,300) worth of fines was imposed on violators of pandemic prevention and control regulations on the first three days of an extensive social distancing period in Hanoi, the capital’s Department of Public Security said on Friday.

Eleven service businesses subject to suspension were fined a combined VND54 million ($2,350) for continuing their operations.

As many as 135 cases had to pay over VND268 million ($11,650) worth of fines for failure to take isolation measures, leaving houses unnecessarily, and wearing face masks improperly.

Hanoi authorities began implementing stricter social distancing regulations under the prime minister’s Directive No.16 for 15 days from 6:00 am on Saturday.

The directive forbids public gatherings of over two, bans non-essential businesses and services, and requires people to stay home unless they go out for food, medicine, COVID-19 vaccination, duties at essential businesses, or other emergencies.

Public transport, including buses, taxis, and ride-hailing vehicles, is suspended.

Administrative fines for such violations range between VND1 million ($43) and VND20 million ($869).

This is the second time that Hanoi has resorted to the stringent Directive No. 16, with the first being in April 2020, which lasted for nearly a month.

The aforesaid measures are the city’s response to the adverse development of the fourth wave of coronavirus infections, which emerged in late April and has infected 988 city dwellers so far.

Vietnam had documented 109,111 COVID-19 cases by Tuesday afternoon, with 18,570 recoveries and 524 deaths, according to the Ministry of Health’s statistics.