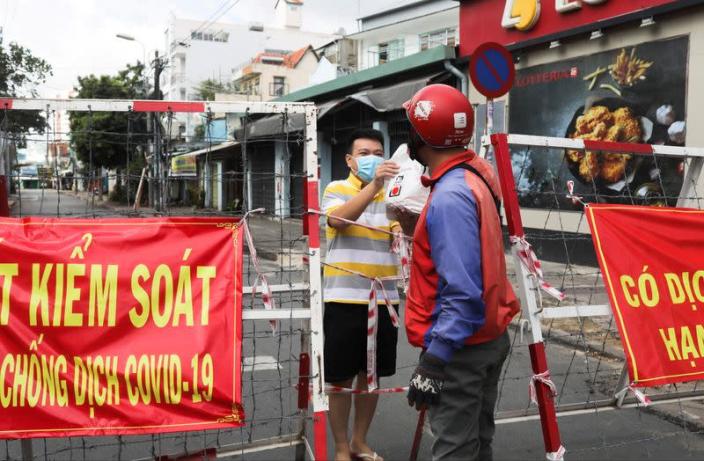 HANOI -- Vietnam's major cities may extend or tighten restrictions on movement to contain the spread of COVID-19 as new daily cases have surpassed 6,000 for seven consecutive days, authorities said on Wednesday.

After successfully containing the virus for much of the pandemic, Vietnam has been facing record daily surges of infections since an outbreak which emerged in late April.

Vietnam reported 6,559 new COVID-19 infections on Wednesday, raising its total number since the start of the pandemic to more than 120,000. Around 450,000 people in the nation of 98 million people have been fully vaccinated, according to official data.

The government has imposed strict curbs on movement in about a third of the sprawling Southeast Asian country, including the commercial hub Ho Chi Minh City in the south and the capital Hanoi in the north.

Authorities in Ho Chi Minh City said the city might need to prolong its social distancing period by one or two weeks after Aug. 1 as infections were continuing to rise.

Due to the mounting outbreak, the National Assembly, the country's lawmaking body, decided to cut short a session in Hanoi by three days to end on Wednesday.

The current outbreak has raised pressure on the government to shore up its vaccine supply and speed up inoculations.

Vietnam has received over 14 million doses of COVID-19 vaccines from multiple sources including donations, the global COVAX vaccine-sharing scheme and its procurement.

A post linked to a British government statement on the donation of 9 million vaccines said the United Kingdom will donate 415,000 doses of AstraZeneca vaccine to Vietnam.