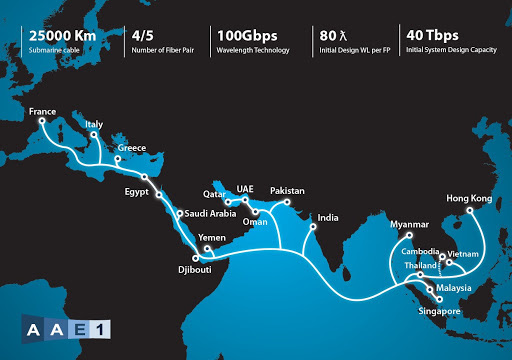 One of Vietnam’s major submarine cable systems broke down once again early this week, resulting in sluggish Internet speed in the Southeast Asian country.

The issue was detected on the Singapore branch of the Asia Africa Europe (AAE-1) cable system, according to a representative of a domestic Internet service provider.

So far, no detail on the cause of the malfunction has been announced.

Meanwhile, service providers say they are working to redirect Internet traffic to other cable networks to ensure connection speed for Vietnamese users.

As the operators see it, the AAE-1 breakdown did not pose any significant damage to the general connection quality in Vietnam.

However, as many students and workers are relying on stable Internet connections for their study and work during social distancing that many Vietnamese areas are upholding, the error could inflict major issues, other industry experts pointed out.

This is the second mishap that the AAE-1 line has encountered this year, the first emerging in May and requiring a fix that took around two months.

The AAE-1 is a 25,000-km submarine communications cable system running from Southeast Asia to Europe through Egypt.

International connection in Vietnam relies largely on the AAE-1 as well as other submarine cable systems including the APG, SMW3, IA, and AAE-1.