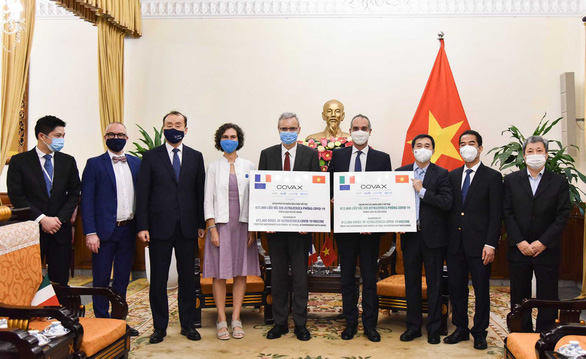 Representatives of the French and Italian governments on Tuesday ceremonially handed over a total of 1.47 million vaccine doses against COVID-19 to Vietnam during a meeting at the country’s Ministry of Foreign Affairs headquarters in Hanoi.

The shipments from France and Italy, respectively consisting of 670,000 and 800,000 doses of the AstraZeneca vaccine, had been pledged to Vietnam prior to the meeting and were distributed through COVAX Facility, a global vaccine-sharing scheme.

The jabs will be promptly distributed to cities and provinces, said Tran Van Thuan, Deputy Minister of Health.

Among the European Union (EU) members, France and Italy rank as two of the largest donors to the COVAX initiative.

They are also listed among Vietnam's biggest EU vaccine donors.

Vietnam has so far gathered almost 37 million doses of COVID-19 vaccine, with 11,725,630 coming through the COVAX program, the Ministry of Health said on Tuesday.

The Southeast Asian country has administered 30.4 million jabs, with more than one million doses given daily from September 9 to 13, according to the official portal for COVID-19 vaccination.

Minister of Health Nguyen Thanh Long said Vietnam will receive an additional 103.4 million vaccine doses by this year's end, with 22.8 million coming in September, 31.2 million in October, 23.9 million in November, and 25.5 million in December.

The health ministry is liaising with international manufacturers to ensure vaccine coverage for Vietnamese residents next year, including children five years old and above as well as people who require annual booster shots as recommended by the World Health Organization.