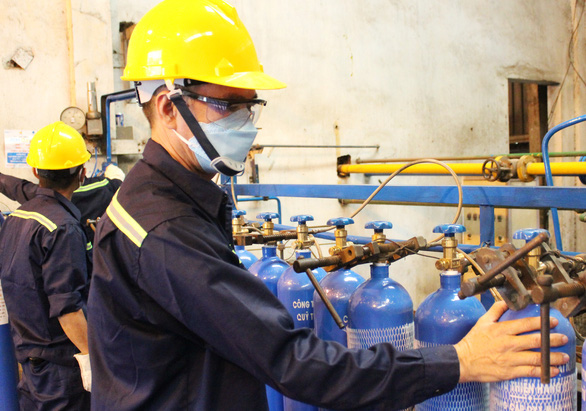 A group of young volunteers in Ho Chi Minh City are saving countless lives through an initiative that provides free oxygen to COVID-19 patients.

As Vietnam’s fourth coronavirus wave continues to rip through the city, its overwhelmed hospitals have been left with little choice but to turn patients away, forcing thousands to quarantine and care for themselves at home.

Many of these patients, particularly those with underlying diseases, are in dire need of oxygen.

Enter ATM Oxy – a group of young people working around the clock to deliver free oxygen canisters to homebound patients in need.

Tran Thien Khiem, a volunteer for the oxygen ATM initiative, was working the hotline for a medical center in Thu Duc City’s Tang Nhon Phu B Ward at 2:30 am one morning in September when a call came through from a nearby resident in need of oxygen for a relative.

Immediately, Khiem and another volunteer made their way to the patient’s home with an oxygen cylinder.

Khiem and his partner hooked the woman up to an oxygen cylinder and called a doctor for help.

By the time medical staff arrived, the woman’s SpO2 level had bounced back to 98 percent and her condition appeared to have stabilized.

While much of Ho Chi Minh City's student population returned to their hometowns once the fourth wave struck, Khiem and his fellow volunteers chose to stay and aid the city in its battle against the pandemic.

For safety reasons, the four volunteers in Tang Nhon Phu B Ward all sleep and eat in the same place.

Meals and sleep time are divided into shifts to ensure someone is available 24 hours a day to answer the hotline and deliver oxygen.

“COVID-19 patients often have difficulty breathing at night, so it’s important that we should be always alert and ready to respond to calls for help,” said Khiem.

Though he volunteers for the oxygen ATM initiative across the city in Tan Phu District, Nguyen Thanh Hoang’s experience working with the project has been similar to Khiem’s.

One particular night that sticks out in Hoang’s memory involved a late-night phone call from an old man who was too weak to speak clearly.

Hoang and his teammate quickly rushed to the man’s house where he and two other older individuals, one with an SpO2 level of just 80 percent, were struggling to survive.

Fortunately, Hoang and his partner were able to support the group of patients.

But not all of the calls they receive are from patients in a critical condition.

“Sometimes we’re called by patients who are not in danger,” Hoang shared, “but we still do our best to respond to every call we receive, even if it just means putting them in touch with a healthcare professional.”

Occasionally, the solution to a patient’s suffering is a quick fix.

Truong The Cuong, a member of the Ho Chi Minh Communist Youth Union in District 6, remembers bringing a canister of oxygen to an apartment where a patient was lying in a position that was making it difficult to breathe.

Cuong helped reposition the patient, hooked him up to the oxygen cylinder, and within a few minutes, he showed signs of improvement.

“The COVID-19 response team in the apartment building where the patient lived was ready to bring him to the hospital," said Cuong.

"Fortunately, they didn’t have to.”

For a better community

According to Thi Van Ngoc Tuan, the leader of an oxygen ATM run by the Thu Duc Communist Youth Union, the need for oxygen cylinders has decreased over the past few days.

“[The decrease in oxygen demand] is a sign that the pandemic is coming under control,” said Tuan.

Though Tuan, Khiem, and Hoang all work in different neighborhoods, one thing they have in common is a desire for the oxygen ATM project to be disbanded.

“If our team is dissolved, it means we’ve been successful in battling COVID-19," Khiem said.

"It means patients aren’t suffering the same way they are now.”

Hoang Tuan Anh, the founder of the ATM Oxy, launched the project following his success with a free rice ATM project that gained attention across the country and around the world.

ATM Oxy is run in partnership with PHG Smartphone, the Vietnam Youth Federation in Ho Chi Minh City, and the Association of Young Vietnamese Entrepreneurs.

Under the slogan of 'Trao oxy - Noi dai su song' ('Offering oxygen for free - Lengthening people’s lives'), the project currently operates in 21 districts in Ho Chi Minh City – a massive expansion from the original six oxygen stations it started with.