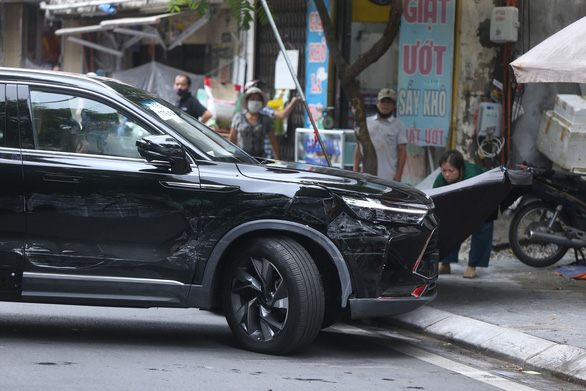 Police officers and residents in Hanoi have resorted to brute force to tackle a car driver who allegedly caused a hit-and-run accident in Ba Dinh District this week.

The incident took place around 12:20 pm on Thursday on Thuy Khue Street in Ba Dinh District, where an unplated car of Beijing brand crashed into multiple vehicles before attempting to flee the scene, eyewitnesses said.

The collisions defaced the front bumper of the Beijing vehicle, but the driver still tried to drive it off, ignoring police and local residents’ calls for cooperation.

“Police showed up at the scene, requiring the driver to pull over and get out of the car, but the suspect did not cooperate,” an eyewitness said.

In order to protect other civilians, police officers and several residents smashed the car window and forced the driver to get out.

After being escorted to the nearby police station, the driver claimed he had lost control over the car and panicked after crashing into two other vehicles, which led to his defiance of police orders.

“The suspect was tested for drug use, but the result came out negative,” said a police officer.

‘He was brought back to the scene to clarify more details.”

Local law enforcement is working to investigate the cause of the crash.