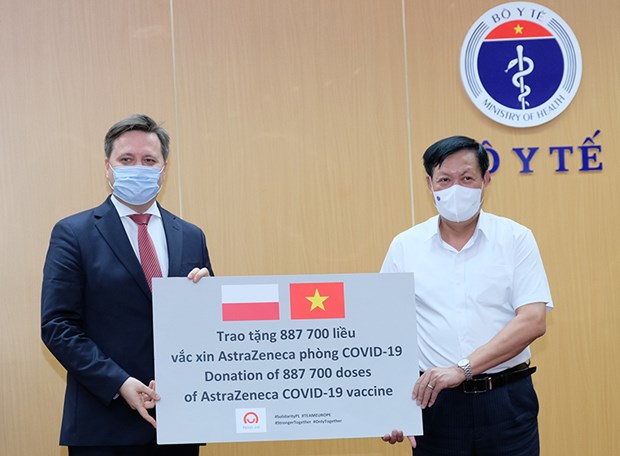 Vietnam’s Ministry of Health has received nearly two million jabs of AstraZeneca COVID-19 vaccine donated by Poland and South Korea as support for the Southeast Asian country’s fight against the pandemic.

At a vaccine reception ceremony held in Hanoi on Friday, Deputy Minister of Health Do Xuan Tuyen expressed his gratitude to the governments and peoples of Poland and South Korea for their aids to Vietnam.

The donations include 1.1 million jabs from South Korea and 887,600 doses from Poland, which were delivered to Vietnam on Wednesday and Thursday, respectively.

“Vietnam is trying to access more vaccine supply sources for national vaccine coverage to achieve herd immunity as soon as possible. Therefore, the vaccine donations from Poland and South Korea are of great significance for Vietnam’s fight against the pandemic,” Tuyen said at the ceremony.

Along with its first aid of 501,600 doses sent to Vietnam on August 21, Poland has so far donated a total of nearly 1.4 million AstraZeneca vaccine shots to Vietnam.

In addition, Poland last month offered Vietnam essential medical equipment and supplies worth around US$4 million for COVID-19 prevention and control.

At the ceremony, Polish Ambassador to Vietnam Wojciech Gerwel expressed his country's gratefulness for the previous support by Vietnamese communities in Poland for the European country’s fight against the epidemic, the Vietnam News Agency reported.

That is the motivation for the Polish government and people to support Vietnam this time, the ambassador added.

Meanwhile, South Korean Ambassador to Vietnam Park Noh Wan said that his country is considering the possibility of supporting another 100,000 AstraZeneca vaccine doses to Vietnam, according to the Vietnam News Agency.

Besides Poland and South Korea, Vietnam has earlier received vaccine donations from many other countries, including the U.S., Australia, France, Japan, Russia, the UK and China, among others.

The country has targeted to secure 150 million doses of coronavirus vaccine to vaccinate two-thirds of its 98-million population, but it has received only nearing 90 million shots from different sources, including COVAX Facility, contract purchases and donations.

By Friday, Vietnam had administered over 41.81 million first COVID-19 vaccine doses and some 17.19 million second shots to people nationwide, the Ministry of Health reported.