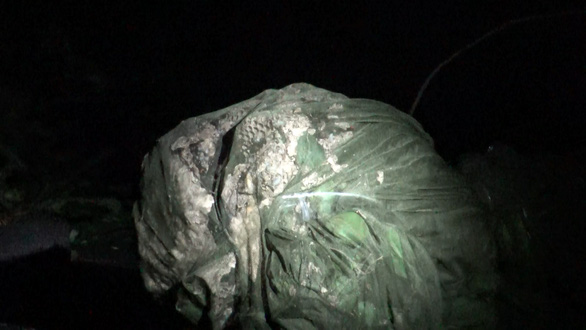 Several rescuers helped remove a giant bumblebee hive from a tree at the Saigon Zoo and Botanical Gardens in District 1, Ho Chi Minh City on Tuesday as it threatened the safety of visitors.

Staff at the Saigon Zoo and Botanical Gardens, or Thao Cam Vien, sought support from the Fire Fighting and Prevention Police Unit (PC07) under Ho Chi Minh City’s Department of Public Security to handle the gigantic beehive on Tuesday night.

The honeycomb was especially large with a diameter of about one meter and had been formed on a tree branch about 30 meters above the ground.

Rescuers from the PC07 wore protective gear and covered their heads and faces to avoid bee stings.

“A mission at such a height requires experienced rescuers to perform as bumblebee stings can stun them.”

At 6:15 pm the same night, four rescuers in protective gear were brought up by a ladder truck to approach the hive.

They used a net to cover the honeycomb before wrapping the opening of the net with duct tape to prevent the bees from flying out.

After 15 minutes, the hive was removed from the tree branch and taken to the ground.

While on duty, a rescuer was stung by a bee in the hip, but the sting was mild.

The Saigon Zoo and Botanical Gardens in Ho Chi Minh City is the oldest zoo in Vietnam and among the most ancient still in operation in the world.

In March, a beehive on a tree in the yard of Hong Bang Middle School in District 5 also posed danger to students and teachers.

The PC07 sent vehicles and rescuers to the school to handle the case.

During the removal of the hive, an officer was stung multiple times.

As it was a poisonous bee species, the rescuer had to be quickly transferred to the nearby 30-4 Hospital for health monitoring.