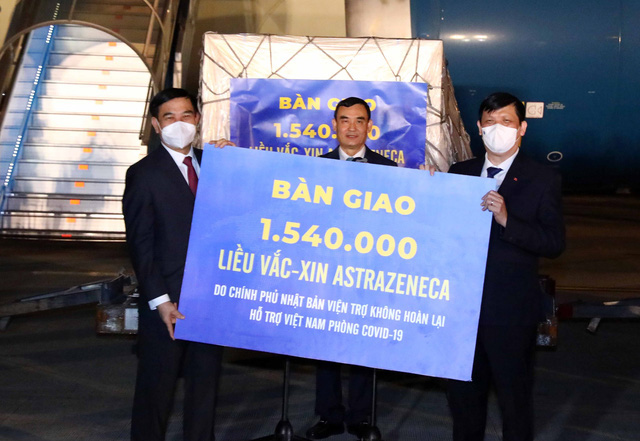 More than 1.5 million doses of AstraZeneca COVID-19 vaccine donated by the Japanese government arrived in Hanoi on Thursday night.

The batch of 1.54 million vaccine shots reached the capital along with the arrival of Vietnamese Prime Minister Pham Minh Chinh, who had just finished his official visit to Japan from November 22 to 25.

The vaccine donation was announced by Japanese PM Fumio Kishida during his talks with PM Chinh in Tokyo on Wednesday.

Minister of National Defense Phan Van Giang, on behalf of the delegation that accompanied PM Chinh to Japan, handed over the jabs to Minister of Health Nguyen Thanh Long during a ceremony at Noi Bai International Airport the same night.

He also handed over to Deputy Minister of Finance Vo Thanh Hung a US$1 million aid from Japan’s Sumitomo Mitsui Banking Corporation (SMBC) for the fight against COVID-19 in Vietnam.

Japan has so far donated about 5.6 million COVID-19 vaccine doses to Vietnam, along with many medical supplies and equipment.

During the meeting with PM Chinh on Wednesday, Japan’s Shionogi & Company expressed the desire to invest in a research and production facility for COVID-19 vaccines and drugs in Vietnam.

This would be the firm’s first such facility in Southeast Asia.

Health workers in Vietnam had administered more than 114.5 million vaccine doses since vaccination was rolled out nationwide on March 8.

Nearly 68.5 million of the country’s 98 million people have got at least one dose while more than 46 million are now fully inoculated.

Health authorities target to fully inoculate 80 percent of the adults and 100 percent of children aged 12 to under 18 by the end of this year, according to a draft government plan for COVID-19 response in 2021-23.