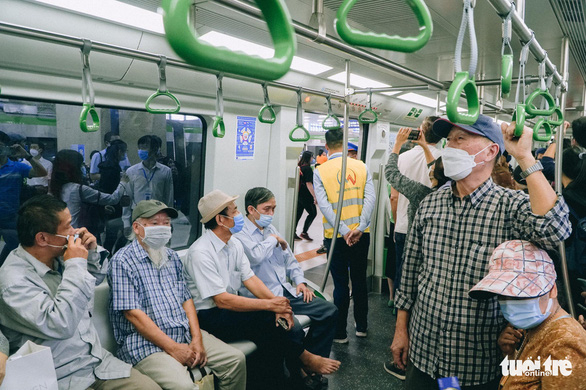 “Unannounced safety drills may happen, but we will inform passengers right after [the drills begin],” Hanoi Metro director Vu Hong Truong was quoted by VnExpress as saying on Wednesday.

Hanoi Metro manages and oversees the day-to-day operation of urban railway lines in the Vietnamese capital, including the Cat Linh-Ha Dong line.

During the mock drills, buses will be used to transport affected passengers to the nearest station where they can either resume their commute or have their fare refunded, Truong said.

According to Truong, rehearsing mock situations that simulate possible real-life scenarios is recommended by independent French consulting consortium Apave-Certifier-Tricc (ACT), the contractor responsible for evaluating and certifying the safety of the Cat Linh-Ha Dong line.

Any of 63 hypothetical emergency situations detailed by ACT might be used in the surprise drills.

“The drills will be launched by state agencies to evaluate how we – the operator – respond to an emergency, so even Hanoi Metro will not be given prior notice,” Truong explained.

Emergency drills in all 63 situations were already played out by relevant units in December 2020 using empty trains, he claimed.

“The only surprise factor is the timing of the drills. Everyone has already been made aware of possible scenarios,” Truong noted, stressing that passengers will not be put in harm’s way.

On Tuesday last week, an emergency forced Cat Linh Station to close for about 30 minutes as operators fixed the line’s signal system.

More than 30 passengers who had already boarded a train at Cat Linh Station had to disembark and have their fare refunded.

“As we had fixed the issue, I received a phone call from a leader of Hanoi’s transport department informing me that it was a surprise rehearsal,” Truong told Tuoi Tre (Youth) newspaper.

The Cat Linh-Ha Dong line, the first in Vietnam, welcomed its first passengers on November 6 after a decade of construction.

A full trip on the 13-kilometer elevated railway takes 23 minutes.

The rail route was built by China Railway Sixth Group Co. Ltd. at a cost of more than US$868 million.

By December 5, nearly 240,000 passengers had taken the route while its trains had made a total of 3,045 safe trips, VnExpress cited Hanoi Metro.