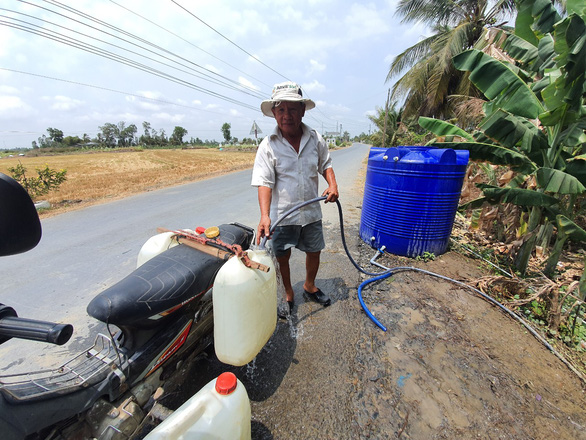 Many provinces in the Mekong Delta region of Vietnam are taking measures to cope with the ongoing issue of saltwater intrusion this dry season, local authorities reported.

Provinces across the region, considered the country’s ‘rice basket,’ are forecasting higher-than-average levels of saltwater intrusion in local rivers, though experts predict the phenomenon will still be less severe than the 2019-20 dry season, according to the Vietnam News Agency.

The Southern Institute of Water Resources Research has warned that rivers in the coastal provinces of Long An, Ben Tre, Tra Vinh, Soc Trang, Bac Lieu, Ca Mau, and Kien Giang may see saltwater intrude up to 60km upstream unless effective prevention measures are taken in the first two months of this year.

The Bac Lieu Province administration on Wednesday announced three possible responses to drought and saltwater intrusion in the 2021-22 dry season.

Each of these three responses was developed for a particular scenario, including if the saltwater intrusion is more severe, less severe, or equal to the conditions during the 2019-20 dry season.

The provincial government asked all relevant agencies, as well as authorities at all levels, to prepare for dealing with harsh conditions.

The current dry season may not be as fierce as it was two years ago, but saline intrusion will come early this year and the freshwater shortage will still take place in the first months of this year, local authorities cited forecasts by scientists and researchers.

The province will have to reduce its growing area for the winter - spring rice crop by 3,400 hectares in areas at risk of freshwater shortage, and spend over VND18.6 billion (US$817,000) on irrigation works to mitigate the impacts of drought and salinity.

A similar situation is occurring in many other provinces, including Ben Tre, where the current saline intrusion is forecast to last until mid-February and its salinity intrusion distances will be equal to those in the 2015-16 dry season.

The provincial Hydro-meteorological Station has warned that the total water amount flowing down from the upper Mekong River to lower areas and the broader Mekong Delta region will likely be 15 percent to 25 percent less than the annual average.

The Ben Tre administration has directed the local Department of Agriculture and Rural Development and other relevant agencies to inspect all irrigation works and evaluate their repair, reform, and upgrading needs.

In order to mitigate the impact of saltwater intrusion, Can Tho City has dredged and upgraded many irrigation canals to increase their storage capacity, the Vietnam News Agency reported.

The Mekong Delta has 13 administrative units, including the centrally-run city of Can Tho and 12 provinces.