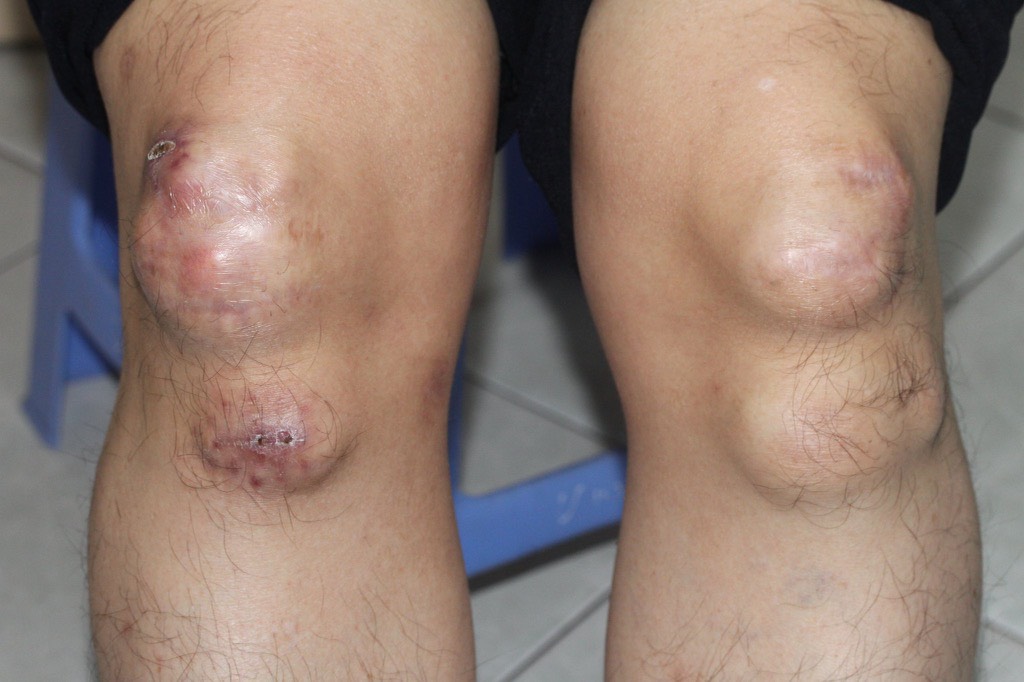 Three people in a family in Ho Chi Minh City with a history of hypercholesterolemia have developed a new gene mutation that is suspected to be given by their father and has never been reported in the world.

N.T.H., a 45-year-old resident of Tan Binh District, is one of those three people.

H. first had a lump under the skin at the joint of the middle finger of his left hand about 20 years ago, before it slowly grew bigger, according to Dr. Hoang Van Minh, head of the Hemangioma Center under the University of Medicine and Pharmacy at Ho Chi Minh City.

These tumors are characterized by bilaterally symmetrical growth.

The patient visited many doctors but failed to get an accurate diagnosis of the disease.

He also underwent several surgeries, but then the lumps recurred after a couple of years.

H. said the lumps do not cause pain but grow in clusters and gradually get bigger, making him feel embarrassed.

To date, he has gone through 15 medical operations to remove the lumps.

Doctors noted that H. had a history of hypercholesterolemia that has had a poor response to medical treatment while his blood cholesterol level continued to rise.

Three years ago, during a general examination, doctors discovered that he had coronary artery disease (CAD).

According to the patient, his father suffered a heart attack and passed away.

Among him and his three siblings, his elder sister and younger brother also have a history of high blood cholesterol levels and poor response to treatment.

The younger brother had similar lumps under the skin but in a smaller number than H. and also had CAD two years ago.

Meanwhile, H.’s eldest brother neither has high cholesterol nor shows any abnormalities.

Suspecting H.’s lumps to be tendinopathy and related to the family’s history of hypercholesterolemia, Dr. Minh gave the patient a general blood test, biopsy, and magnetic resonance imaging (MRI) of the tumor in his heel tendon.

Recognizing that this is a rare disease, Dr. Minh sent samples of H.’s tumor to the U.S. for pathology and consultation.

The results of histopathological examination and consultation from the U.S. confirmed the patient’s fatty lipoma of the tendon sheath as diagnosed by Dr. Minh.

An examination and a biopsy of the lumps at the elbow of the youngest brother returned the same result of lipoma.

Dr. Minh examined genes of H.’s entire family members with help from the molecular genetics unit of the School of Medicine at the Vietnam National University-Ho Chi Minh City.

The results of gene decoding revealed that H., his elder sister and younger brother had a history of hypercholesterolemia due to a new gene mutation suspected of being passed down from their father.

This new gene mutation, which is found in different body parts of H. and his family members, has never been reported in the world.

This is an interesting finding because these lipomas are usually found only under the eyelids of ederly or obese people, according to Dr. Minh.

H. and his two siblings with this new gene mutation all have sub-articular lipomas that make it difficult for them to walk, leading to their high cholesterol level and cardiovascular disease.

His father died as these lumps were uncontrolled, easily increasing the risk of a stroke.

H. and his siblings have been prescribed certain pills and follow a diet excluding fat and animal organs to control the cholesterol level and prevent a stroke.

Their case may prompt scientists around the world to find special medicine to treat such large layers of lipomas that develop at many skin joints.