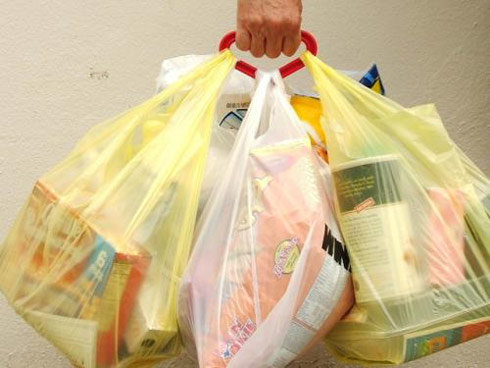 Supermarkets and trade centers in Vietnam will be fined for distributing disposable plastic bags to customers from 2026, the Vietnam News Agency quoted an environment official as saying at a seminar to reduce the consumption of single-use plastic bags in the country on Wednesday.

The seminar, which summarized the PLASTIC ALLIANCE pilot project, was jointly held by the Institute of Strategy and Policy on Natural Resources and Environment (ISPONRE), the Department of Industry and Trade of Hanoi, and Expertise France – the European country’s public agency in charge of international technical cooperation.

Nguyen Trung Thang, deputy director of the ISPONRE, said that Vietnam has issued a lot of legal documents to control serious risks of plastic waste to the environment.

The country also strives to use 100 percent of environmentally-friendly bags at shopping centers and supermarkets by 2025.

Thang cited a survey by his institute as saying that up to 104,000 single-use plastic bags are distributed by supermarkets in Vietnam each day, equivalent to 38 million bags a year.

Among the 48 supermarkets surveyed, 46 are providing plastic bags for free.

“From 2026, supermarkets and trade centers will be fined for providing disposable plastic bags to customers,” Thang said.

The PLASTIC ALLIANCE gathers 16 retailers that pledge to reduce the use of disposable plastic bags.

It is part of the 'Rethinking Plastics - Circular Economy Solutions to Marine Litter in Vietnam' project funded by the European Union (EU) and the German government and carried out by Expertise France.

The alliance has stepped up awareness programs, both directly at points of sale and online on social media platforms, to change consumers’ behavior by reducing the use of plastic products.