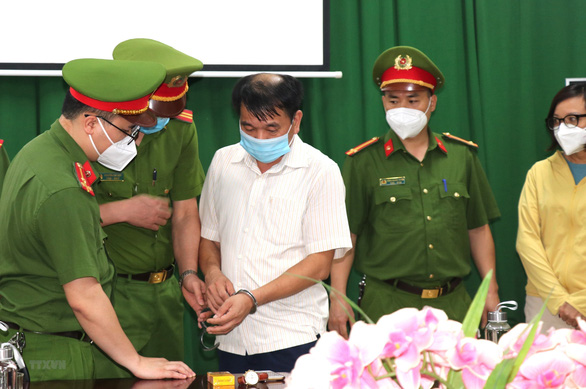 Giving and taking kickbacks in procuring coronavirus test kits during the COVID-19 pandemic has been uncovered across Vietnam, with dozens of health officials arrested for involvement in price gouging for illegitimate profit by a supplier discovered five months ago.

So far, more than 30 health officials, including three seniors from the Ministry of Health and the Ministry of Science and Technology, and eight directors of provincial centers for disease control (CDC), have been arrested for receiving 'commissions' as kickbacks from Viet A Technology Corporation (Viet A Corp.), which had illegally raised prices of test kits to earn huge profits.

The latest arrest took place on May 11, when Ha Giang Province CDC director Nguyen Tran Tuan and his two subordinates were apprehended on charges of taking bribes.

They were found to have taken bribes of billions of dong (VND1 billion = US$43,000) from Viet A Corp. which they had handed in to police after their offense was uncovered.

Currently, many other suspects are under interrogation by investigators, the Ministry of Public Security’s Investigation Police Department said.

Preliminary investigation results determined that Viet A Corp. had supplied test kits to CDCs and other medical facilities of 62 provinces and cities, raking in nearly VND4 trillion ($171.8 million).

In April 2020, the Ministry of Health granted a circulation license for Viet A Corp.'s one-step RT-PCR test kits, the first-ever made in Vietnam.

Given the increasing demand for COVID-19 test kits amid a serious outbreak that started hammering Vietnam in late April, Viet colluded with CDC directors of many localities to hike the prices of such kits to illicitly make a huge amount of money, according to investigators.

Viet had directed his employees to overstate the prices of production equipment and input materials to hike the selling price of a test kit to VND470,000 ($20.18), or 45 percent higher than the original rate, to earn a difference of VND500 billion ($21.5 million).

Viet confessed to investigators that he had paid 'commissions,' in fact illegal kickbacks, worth nearly VND800 billion ($34.6 million) to his partners who bought his test kits at the inflated prices.

Bac Giang Province CDC has been identified as the health agency that Viet paid the most, up to VND44 billion ($1.89 million) accounting for 30 percent of the total value of VND148 billion ($6.35 million) worth of test kits purchased from Viet A Corp..

Lam Van Tuan, director of the CDC, his sister Khanh Van, and Phan Huy Van, director of a local pharmaceutical and medical equipment company, were found sharing the kickback and were captured on January 21, 2022, investigators said.

The second-highest kickback amount paid by Viet A Corp. was to Hai Duong Province CDC, where Tuyen, director of the health agency, received a bribe of VND27 billion ($1.16 million) from Viet.

The CDC directors of Ha Giang and Nam Dinh Provinces were also found to have received 'commissions' worth VND770 million ($33,050) and more than VND3.1 billion ($129,000), respectively, from Viet A Corp., among many other kickback cases.

Before being arrested, many of the CDC directors told the press that they “did not receive any money from Viet A,” and that all their medical equipment procurement had been made through legal procedures.

Among these directors are Lam Van Tuan as said, Nguyen Van Dinh in Nghe An Province, Hoang Van Duc in Thua Thien-Hue Province, and Do Duc Luu in Nam Dinh Province.

The rates of other medical equipment have also been manipulated, a source told Tuoi Tre (Youth) newspaper.

Recently, a piece of medical equipment was posted for sale for VND900 million ($38,670) on the Ministry of Health’s e-portal for public medical equipment prices, but the real rate was just half that, the source said.

Annually, every medical facility has a need to purchase equipment, drugs, and other medical supplies for its operation and the procurement must be carried out through a public and transparent bidding process, a hospital director said.

However, the director stated, some suppliers suggested giving kickbacks to the people in charge of the bidding so that they could win the bid packages.

“It is important for heads of any medical facilities to comply with bidding regulations and give the same fair treatment to every bidder,” the director stressed.

Offering and taking kickbacks or bribes in medical equipment procurement are not only found in Vietnam but also in other countries, including the U.S. and European nations.

In 2021, the U.S. Department of Justice handled many violations of the False Claim Act (FCA) and the Anti-Kickback Statute (AKS) in the healthcare industry.

Most recently, in April 2022, the U.S. Department of Justice opened investigations into violations of AKS regulations, including a number of ‘kickback’ cases to provide COVID-19 test kits, in many states.

Between 2016 and 2020, the disciplinary inspection and supervision commission in Guangxi Province investigated more than 4,000 scandals in which health officials took unfair advantage of their positions to earn personal profit when buying medical equipment, drugs, and medical supplies, the CCDI said.