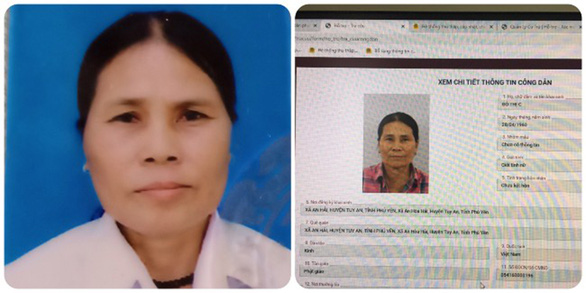 Twin sisters in the south-central Vietnamese province of Binh Dinh were able to find each other after losing contact for 47 years thanks to the country’s recent chip-based ID card issuance campaign.

During the process of verifying information to issue the chip-mounted ID card for Ben, the unit detected a facial duplication case, according to Thanh.

The police officers then suspected that Ben may be the twin sister of Do Thi C., a woman living in Tuy An District in neighboring Phu Yen Province that had been provided with her new ID card in March.

“We invited Ben for a working session and learned that she had got lost from her family in 1975 before she was adopted by new parents in Hoai Nhon Town and has been living there until now,” Thanh said.

“She didn’t know where her hometown was,” the policeman added.

Via coordination with their colleagues in Tuy An District, the Hoai Nhon police managed to verify that Ben is C.’s younger twin sister, who had gone missing since 1975.

“Both Ben and C. were very happy to reunite after losing track of each other for decades,” Thanh said.

“We are also happy to help them find each other in such a unique circumstance,” the officer added.

Vietnam has been issuing chip-based ID cards, a newer form of citizen’s identity document compared to the old nine-digit ID cards and ID cards with barcodes, to eligible citizens under a nationwide campaign to incorporate different paper documents as a basis to develop the digital economy and society.