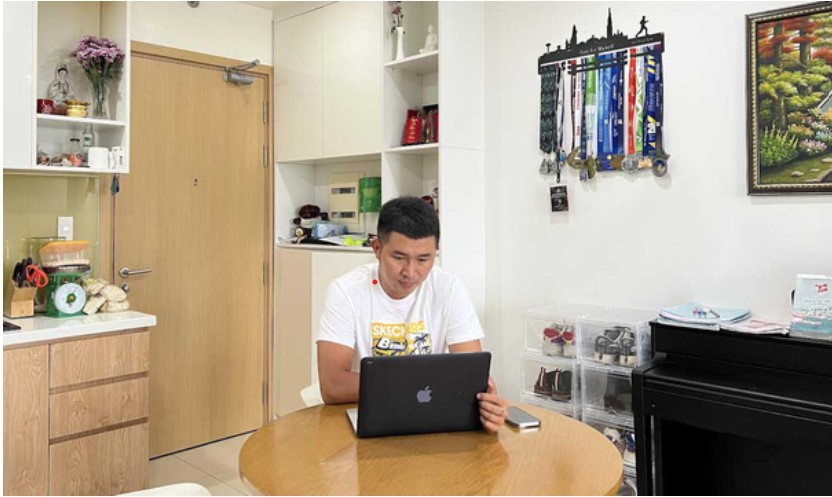 How did they manage to buy houses in the city?

Although buying a house in a megacity like Ho Chi Minh City is a big challenge, there are people who have managed to do it.

Apart from the support of their families, each of them had to find their own way to realize their dream of owning a house in the city.

In November 2021, Nguyen Thi Lan Nhi surprised many people by posting a photo of her apartment on Facebook with the status "My home. Five years and two months since I moved to Saigon".

At that time, Nhi was just 23 years old and bought the apartment with her savings.

Lan Nhi is one of not too many young people who, thanks to hard work over a long period of time and accumulation and investment, will soon be able to fulfill their dream of owning a home in the city.

In order not to be crushed by home loans, young people like Nhi planned to buy a house carefully before signing the contract. Of course, they took various factors into consideration when making this decision.

A 38-square-meter apartment in Thu Duc City, Ho Chi Minh City, is a nice achievement for Nhi after years of trying her best to work hard and save.

"I live alone, so such an apartment is enough for me. It is about 15 kilometers away from my company and it is more important for me to afford it.

"I will consider moving to a bigger apartment when I can," said the young employee, who works as an editor at Ho Chi Minh City Television (HTV).

Lan Nhi has already prepaid more than 50 percent of the house's value and is now paying VND10 million to VND15 million (US$431 to $647) a month for the installment plan.

Lan Nhi said that she was planning to buy a house as she was still struggling to pay living expenses.

"I tried to save a sum to pay 50 percent in advance to reduce the pressure from debt," said the young woman from the Central Highlands province of Gia Lai.

While preparing to buy an apartment, Lan Nhi had to take many jobs at the same time, including editor, MC (stands for Master of Ceremonies) and working for an agency.

At the moment, she only works for HTV after paying 70 percent of the value of the apartment.

According to Lan Nhi, she always divides her salary into four parts to cover the most important expenses.

"The second part is for living expenses for the month, the third part is for my parents in my hometown, and the last part is for saving in case of unexpected events," Lan Nhi explained.

Although she does not borrow money from this part to pay for the other part, Nhi also had to give up some unnecessary things to maintain a stable financial situation.

"I used to take some extra classes to improve my professional skills, but now I only take the classes that are very important to me, such as English classes," Lan Nhi said.

"I used to buy anything I liked or travel a lot. Now I do not dare to travel far or go anywhere at all," she said, adding that she has forced herself to use no more than 10 percent of her savings each month.

Another young man who has managed to buy a house is Nguyen Duc Linh.

At the age of 27, Linh has already bought a house in southern Ho Chi Minh City after working hard for years.

Duc Linh was born into a poor family in Kien Giang Province in the Mekong Delta and did not continue his studies after graduating from school because of his poverty.

He came to Saigon to learn how to cut hair, and then rented a store to run his own business as a barber in the city.

Thanks to hard work and luck, Duc Linh amassed a fortune after a few years.

He gradually expanded the business to two or three hair salons and earns a monthly income of millions of Vietnam dongs, not to mention income from his other investments.

Despite the impact of the COVID 19 pandemic, the hairdresser's fortune has increased in recent months, allowing him to buy a 157-square-meter house on the outskirts of Nha Be District.

Since the young man considered all financial aspects before deciding to buy the house, he is not worried about such high monthly payments.

Pay off the home loan in just three years

Pham Anh, a male employee from the Mekong Delta province of Long An, was able to buy an apartment in District 7 about five years ago.

Apart from his own work efforts, Pham Anh, like some other lucky young people, received support from his family.

"The debt made me sleepless, my hair even turned gray because of the pressure from the loan," Pham Anh added.

As a person who always sees the positive, Pham Anh encouraged himself to keep a strong spirit and not give up under any circumstances.

"This is a loan that I have to pay back sooner or later. So it is my duty to do everything in my power to pay it back," said the 27-year-old man.

With this in mind, Pham Anh focused on paying the principal amount first to free himself from the bank's reminders.

"Thanks to my agreement before signing the contract, I could pay the repayment installment in advance without being penalized, so I often paid as much as I could, sometimes as much as VND50-100 million ($2,156 - $4,313).

"Therefore, my loan decreased dramatically over time, as did the interest rate of the loan," the man recounted his process of loan repayment.

In the first year of repaying the loan, Pham Anh was frugal with his spending and thought twice before buying anything.

In the second year, he changed his strategy and used the amount allocated for repayment to invest in stocks.

In the third year, he decided to invest in real estate to increase his wealth.

In this way, in addition to the income from the three jobs and the returns from these investments, Pham Anh was able to repay the house loan in October 2020 and still had a balance for other investments.

Having our own house makes our life more comfortable

Thuy Anh, 32, a woman who came to Ho Chi Minh City from the central province of Thanh Hoa, was also able to buy a home thanks to financial support from her relatives.

In 2017, Thuy Anh and her husband decided to buy the 54-square-meter apartment with one bedroom and one living room in Phuoc Long B District, Thu Duc City, at the price of VND1.4 billion ($60,383).

"After paying off the debt to the bank, we now have to repay our relatives' loan of VND200 million ($8,626)," she added, saying that her life has become more pleasant and comfortable now that she owns an apartment.

Returning to her own house, which is cleaner and bigger than the apartment she rented before, makes her feel more relaxed.

"The apartment meets our needs right now. We will consider moving to a bigger apartment when demand increases and our finances allow," she said.