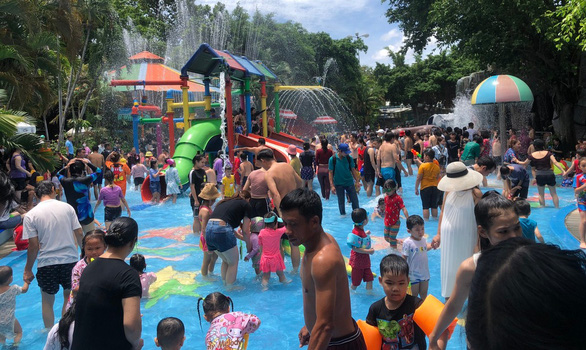 Dam Sen Water Park, a popular destination during the summer holiday in District 11, Ho Chi Minh City, has been filled to capacity over the past few days, making many visitors feel tired and unpleasant as they have no space to enjoy services there.

N.D.Van, a resident of Go Vap District, Ho Chi Minh City, told Tuoi Tre (Youth) newspaper that on July 10, he took his family to Dam Sen Water Park for entertainment but his family left early as they could not play any games there.

“There was even no space for us to have a snack. The crowded and cramped bathing area tired everyone, especially children and the elderly," Van said.

He said his family spent more than VND1.2 million ($51.5) on tickets and travel so he felt like he was tricked because what they received was not commensurate with their spending.

“The company operating the water park knows its capacity and the number of guests but it turns a blind eye to earn a profit, while the crowding may cause danger to guests, which is unacceptable,” Van said angrily.

Besides Van, many others have complained about the crowds at local entertainment destinations during the summer holiday, including Dam Sen Water Park.

Cuong said with an area of nearly 20,000 square meters, Dam Sen Water Park can concurrently serve 5,000-6,000 guests, but many came at the same time, especially on Saturday and Sunday morning, leading to the crowding and the shortage of facilities.

“The water park has counters to ensure the appropriate number of guests and notifies them of the density therein," Cuong explained.

"However, many visitors coming with their family members or from other provinces still want to enter the water park regardless of the overcrowding.

“We have found it hard to refuse their entry or ask them to wait, so we have let them go inside.”

To ease the jamming, the corporation has worked with Dam Sen Cultural Park, which includes Dam Sen Water Park but the two parks operate separately, to expand the water park or move guests from there to the cultural park if needed.

Meanwhile, during the summer holiday, visitors should contact operators of entertainment destinations before making plans to come there.