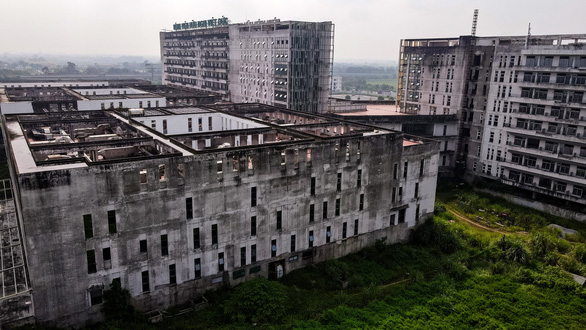 Though Bach Mai and Viet Duc University Hospitals in Hanoi are both overloaded, authorities have done little to push forward with two public hospital projects in neighboring Ha Nam Province that have been left abandoned for nearly a decade.

The two abandoned hospital projects, carrying an estimated price tag of VND10 trillion (US$421.2 million), were recently included in an inspection authorized by Prime Minister Pham Minh Chinh and leaders of the Ministry of Health.

The inspection led to orders that bottlenecks be removed from these two projects, named Bach Mai 2 Hospital and Viet Duc University 2 Hospital, and that they be put into operation as soon as possible.

Bach Mai Hospital currently welcomes between 6,000 and 9,000 visitors per day, far above its designed capacity.

“Both outpatient and inpatient numbers are on the rise, and the demand for medical check-ups and treatment is huge," a representative of Bach Mai Hospital said.

“Post-operative patients are often left to rest in hallways and some have to be discharged or transferred to lower-level hospitals.

“[The patient overload] affects the quality of surgeries [at Bach Mai Hospital] and the safety of our patients.

“We hope the hospital’s satellite campus will be put into operation soon and that it will ease the overwhelming at our main campus."

Though satellite hospitals for both Bach Mai and Viet Duc University Hospital were approved by the prime minister on January 16, 2014, bottlenecks have caused serious delays in both projects.

The two hospitals were originally meant to house 1,000 beds and be completed by the end of 2017, but both failed to meet that deadline.

Despite not being completed, Bach Mai 2 Hospital did finish work on its outpatient department and was able to open its doors in October 2018, but it was shut down within a year because there were no other departments in the hospital yet open for outpatients to be referred to, causing significant losses for the hospital.

In 2019, with both projects still far behind schedule, the Ministry of Health proposed extending the deadline for each project’s completion to December 31, 2020.

Construction on both projects has since been completed, but the missed deadlines mean the capital budgeted by the state in 2017 and 2018 for each hospital’s operation cannot be handed over without new approval.

A representative from the Ministry of Health attributed the two projects’ slow progress to the ministry’s lack of experience, noting that “this is the first time we have launched such projects, so we could not anticipate the problems that arose during their execution.”

A major contributor to these delays was the changes made to each hospital’s design during the construction process.

Both hospitals were designed by foreign design companies using standards set forth by overseas medical institutions, according to the representative.

During the construction phase, however, changes were made to the design plans, including to the planned air conditioning systems, water heating systems, elevators, and residence area.

Other factors in the delay included bottlenecks in the implementation of construction contracts, payment, and the capital disbursement.

According to Tran Binh Giang, director of Viet Duc University Hospital, the new satellite campus has yet to be handed over to staff and a recent inspection uncovered that the facility still lacks medical equipment while some outdoor areas have become overgrown with weeds.

“To prepare for the facility to open its doors, we have recruited many doctors and nurses. We also have plans to detach one-third of staff from our main campus to our second campus,” Giang said.

Work on the two projects has been suspended and both are currently closed, according to a recent report from the Ministry of Health delivered at a meeting with the prime minister.

The report also noted that the capital disbursement for the two projects has reached between 55 and 57 percent.

At a meeting to discuss the report, Prime Minister Pham Minh Chinh highlighted that the government’s original plan was to launch five central hospitals during three government tenures.

Three of these five planned hospitals have been completed while the other two – Bach Mai 2 and Viet Duc 2 Hospitals – are lagging behind.

Within a maximum of two months, the working team must propose solutions for removing legal and technical obstacles and shortcomings standing in the way of opening the two hospitals.

The prime minister also underlined that the two hospitals must be put into operation in 2023.

According to a leader from Bach Mai Hospital, once the second campus is put into service, each department will be able to function in conjunction with one another in order to meet treatment demands.

The leader also noted that there are currently 1,300-1,500 employees tapped to work at the new hospital.

“The hospital has plans to staff the new campus. Apart from young medical workers, experienced doctors and nurses will be appointed to ensure the hospital’s quality,” the hospital leader said.

Following the prime minister’s inspection, leaders from both Bach Mai 2 and Viet Duc 2 Hospitals said they are hopeful that the long-stalled projects will be resumed.

A representative of the Department of Medical Equipment and Constructions under the Ministry of Health also reiterated that the department has been working with the relevant units to remove obstacles of the two projects and that the ministry is working to ensure proper medical equipment is provided to the two hospitals.

Given the situation, it is extremely unfortunate that the two satellite campuses have sat inoperable for many years.

During the inspection, the prime minister attributed the slow progress to weaknesses and shortcomings in the formulation, consultancy, appraisal, investment, and selection of contractors for the projects.

In the near future, it is important to determine the status of each project and any roadblocks they face. It is also important to prepare the necessary human resources to open each project.

The causes for the slow progress were pinpointed by the prime minister but the poor preparation and execution of the projects have obviously led to technical adjustments and the cost overruns.