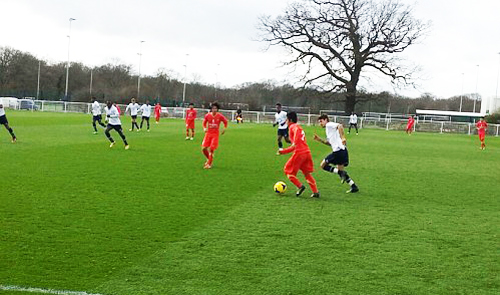 The Vietnamese national U-19 football team was yesterday given a heavy loss after conceding nine goals to nil to Tottenham Hotspur U-19s during their friendly match in the Tottenham training center in London.

The visitors pushed up their formation but were unable to pierce through the strong defense wall of the host team. From that moment, Tottenham set a lethal trap to play swift counter-attack.

The Vietnamese goalie was beaten four times in the first half and conceded five additional goals in the second.

This is the first loss of the Vietnamese team during their training session in England.

The Vietnamese are on a 51-day training trip, lasting till next month, to England, France, Belgium, and the Netherlands to prepare for the 2014 Asian U-19 Football Championship to be held in October in Myanmar.

Vietnam targets to place in the top four of the 2014 Asian U-19 Football Championship to automatically secure one of the four direct tickets to advance to the final round of the FIFA U-20 World Cup in 2015, to be held between May 30 and June 20 in New Zealand.