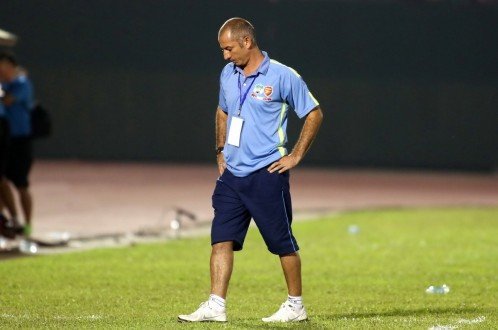 Can Tho and Dong Nai rank right above HAGL with 17 points each. There are 14 clubs competing in the V-League 1.

HAGL hope the dismissal will lead to better results in their relegation battle in the five remaining rounds.

“I am not surprised at the decision of the club because it is what all head coaches of football clubs must think about when their teams are not playing well,” Guillaume said.

Doan Nguyen Duc, chairman and owner of HAGL, said the French coach will return to his previous job of youth training at Hoang Anh Gia Lai – Arsenal JMG Football Academy, which provided most of the players for the club.

Guillaume will be replaced by his assistant coach Nguyen Quoc Tuan to lead HAGL in the five coming matches of the V-League 1, Duc said. The HAGL boss confirmed that he will take the main responsibility for the losses this season, not Graechen Guillaume, as he had decided to use under-23 players who are graduates from the academy for the tough league.

The fresh graduates are too young to compete against their experienced rivals in the V-League 1, he added.

The French coach and HAGL football delegation chief representative Nguyen Tan Anh had a tense argument over the arrangement of players during the 0-1 loss to hosts Dong Thap on August 15.

Most domestic players of HAGL competing in the V-League 1 are graduates from Hoang Anh Gia Lai – Arsenal JMG Football Academy.

They are the youngest in this year’s league, with the average age of 21.7 years.

Duc once expected that these players would be able to play for football leagues in Europe one day.