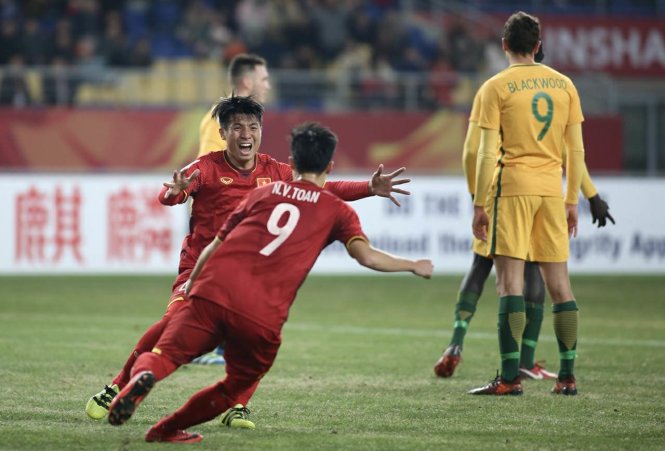 Vietnam beat the Olyroos 1-0 in their second group stage game at the 2018 AFC U-23 Championship in China on Sunday.

The Vietnamese thus pocketed the first three points after a loss in the opening game earlier this week.

The Golden Stars were considered the underdogs in the clash with the Olyroos, who defeated Syria 3-1 in their opener on Thursday.

Vietnam lost 1-2 to South Korea after a 17th-minute lead the same day.

Sunday’s Group D match saw the Australians dominate and hit the woodwork while having a goal disallowed.

Vietnam striker Cong Phuong narrowly missed a chance in the 33rd minute following a short pass back by Alex Gersbach.

George Blackwood netted in the 64th minute, only to see the goal disallowed as he had been offside.

The winner goal was scored by striker Quang Hai amid a sea of defenders in the 71st minute, stunning the Olyroos and analysts. Hai has scored twice at the tournament.

Blackwood failed to equalize ten minutes later with his header hitting the bar.

Trent Buhagiar slipped to miss the last opportunity in the 90th minute.

South Korea will take on Syria in the other group game later on Sunday.

In the last group stage games, Vietnam are scheduled to play the Syrians on January 17 while the Koreans and the Australians will also battle it out the same day.

The AFC Under-23 Championship, running from January 9 to 27, is a biennial competition that features 16 of Asia’s top teams in that age group.

Japan beat South Korea to win the championship at the 2016 event in Qatar.