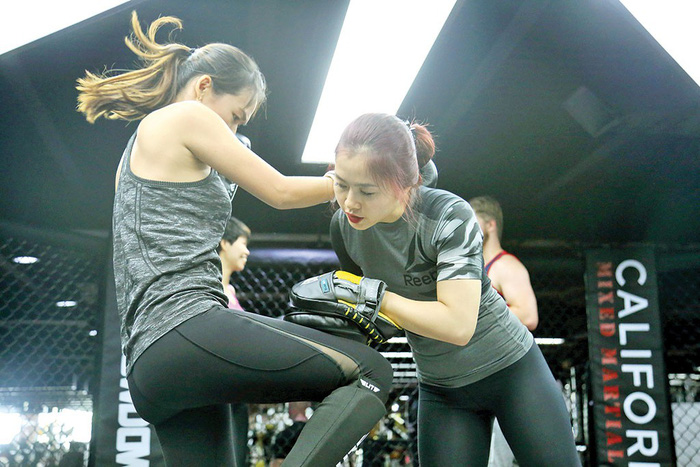 A number of women in Vietnam have fashionably been practicing exercises which have hitherto been pursued predominantly by men in recent times.

Women can usually be seen in classes where long-standing martial arts are taught like taekwondo, from South Korea; judo and aikido, from Japan.

They have also followed new types of exercise, which are currently in vogue in several parts of the world.

Kickfit has gained popularity amongst men and women within the country.

Fusing standard boxing into Muay Thai, which is Thailand’s combat sport that allows striking and different grappling techniques, Kickfit is touted as effective in yielding weight loss and an attractive body contour.

At first sight this exercise seems too rough to be suited to women, as they practice in boxing rings, or even cages, but it has been modified to fit the bill.

“Actually this kind of martial art is not very violent. It has nice kicking postures. It helps women develop their healthy skin,” said Tran Thanh Thuy, a member of a Kickfit class.

She added that she has never suffered any injuries related to the training.

Serving the purpose of combining powerfulness and sexiness are piloxing barre and zumba, which constitute growing trends in Vietnam, where feminine beauty is typically associated with white and tallness and slimness.

Pilloxing is a portmanteau name for a fitness program combining strength from boxing and agility from Pilates, an exercise that emphasizes controlled and accurate movements of the body and the apparatus.

Pilloxing barre involves movements using a barre, a horizontal fixed bar, while zumba conflates dancing and aerobics in the presence of electrifying music.

Zumba classes in California Fitness and Yoga Centers for instance usually have many attendants.

Many women do not flinch from newly introduced sports like hockey, mountain climbing and mountain biking, which they think increase mental endurance and gear them up for challenges likely lying ahead.