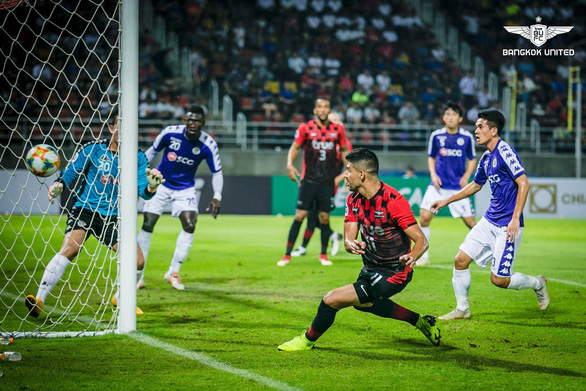 Hanoi FC have set up a qualifying play-off with Shandong Luneng from China to vie for a ticket to the group stage of the 2019 AFC Champions League, following their triumph over hosts Bangkok United in the preliminary round on Tuesday.

The Vietnamese visitors staged a pressing game at Thammasat Stadium despite their wealthy opponents being the runners-up of the top-flight Thai league in 2018.

Both sides missed many chances in the first half, with the hosts displaying a better form in the second one.

Hanoi’s Do Hung Dung narrowly missed a chance in the 34th minute, when Filipino goalkeeper Michael Falkesgaard denied him excellently.

Ganiyu Oseni faced the goalie again in the 40th minute but the Nigerian forward could not make it.

The hosts almost scored in the 56th minute as Nguyen Van Cong blocked a shot from close range with his leg.

Oseni disappointed his fans as he failed to convert when facing the Bangkok United goalie one-on-one several times.

But he earned Hanoi a penalty in the 88th minute, following a tackle by a Bangkok United defender.

Nguyen Van Quyet stepped up to the spot and scored the winner.

Many chances failed to be converted by both sides in the remaining time.

Hanoi will play Shandong Luneng, who have just signed former Man Utd star Marouane Fellaini, in China on February 19 to vie for a ticket to the 2019 AFC Champions League group stage.